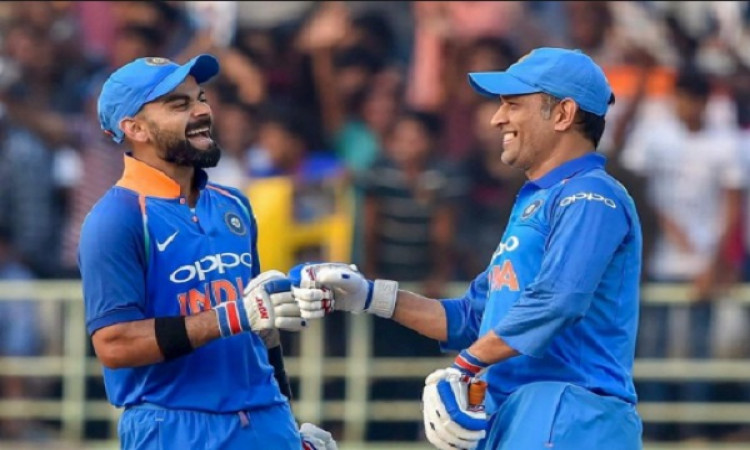 June 29 (CRICKETNMORE) Backing the under-fire Mahendra Singh Dhoni, India skipper Virat Kohli on Saturday said that the veteran stumper-batsman was someone who didn't need to be told what to do. Kohli also put his weight behind all-rounder Vijay Shankar on the eve of the high-voltage World Cup group stage clash against hosts England.

"He (Dhoni) had a decent game against Pakistan. Against Afghanistan on that pitch, he looked really assured. We had discussed shot selection with him for that game. In the last game again, he came out and looked really good," Kohli said during the pre-match presser.

Shankar, who is currently occupying the much-debated number four slot, has failed to cash in on the opportunity with scores of 29 against Afghanistan and 14 versus the West Indies. Batting at number six against arch-rivals Pakistan, the Tamil Nadu all-rounder remained not out on 15.

Although India, the only unbeaten side in the World Cup so far, won all the three matches, there have been calls to remove Shankar with the competition entering its business end.

"So you can't really sit down and pinpoint things. But I personally felt that he (Shankar) looked really solid. There's not much that needs to be tinkered with. Sometimes in cricket you just need a bit of luck to get over from 30 to 60, and then you play a defining knock for the team.

"He's very close to that, and we're very confident that he's going to end up playing that kind of knock for us," said Kohli, echoing former England batsman Kevin Pietersen who had said in a tweet that India should stick to Shankar as a big knock was just around the corner.

On Dhoni's slow strike-rate in the previous two matches, Kohli said: "I don't think that he has ever been a cricketer who needs to be told what exactly he needs to do.

"What we experience and what we know inside the changing room is the most important thing for us, and we have total belief in him (Dhoni). He stood up for the team many times, especially if you look at this calendar year and the kind of performances he's given. I don't think it's fair to point out one or two performances as anyone can falter with the bat."

Kohli also brushed aside India's middle order worry, saying there will always be talks as they have a strong top order.

"Look, that discussion is always going to go on because we've had such a strong top order that these guys have hardly had a chance to bat. When they bat, out of four times, if once or twice it doesn't come off, then we feel like, 'it's not a strong middle-order', but we overlook the times that it has come good," the skipper said.

"If you look at the first three games that we played, the contribution was absolutely fine. We were getting 300 plus, and no one said anything. Then after one game where we could not accelerate as much, everyone said that maybe it's not as strong," he said.

India, with 11 points from six games, are currently placed second in the table. They need to win just one out their remaining three matches to qualify for the semifinals.

England, on the other hand, need to win both their remaining games to advance to the knockout stage.