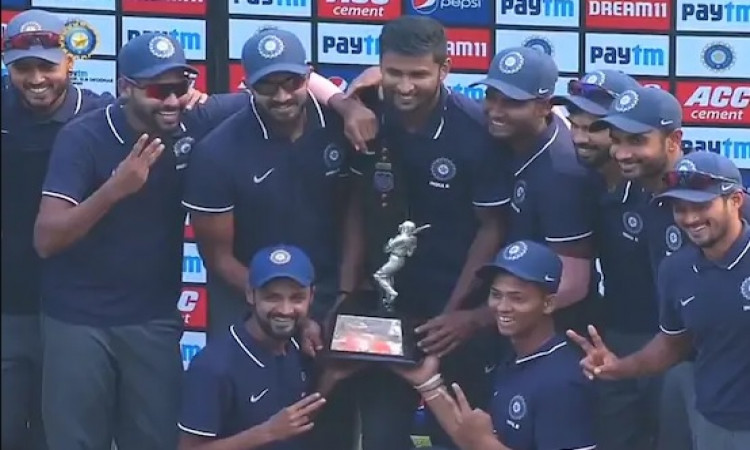 Ranchi, Nov 4: Kedar Jadhav and Shahbaz Nadeem starred for India 'B' as they beat India 'C' by 51 runs in the final to win the Deodhar Trophy title 2019 here on Monday.

After India 'B' skipper Parthiv Patel elected to bat first, Jadhav struck 86 off 94 balls, his innings was laced with four fours and as many sixes, with Yashasvi Jaiswal also scoring 54 to help India 'B' reach 283/7 in 50 overs.

Also Read: Virat Kohli is comfortable in his own skin: Simon Taufel

There were contributions towards the end from Vijay Shankar (45) and Krishnappa Gowtham (35) as the side recovered from 92/4 at the halfway stage to post what proved to be a competitive total.

For India 'C', who started the summit clash as the favourites owing to the presence of skipper Shubman Gill and in-form India Test opener Mayank Agarwal, Ishan Porel returned best figures of 5/43 in 10 overs.

Chasing 284 for victory, India 'C' were never really in the chase after losing Gill (1) and Agarwal (28) early. Priyam Garg scored a fighting 74 but it went in vain as Nadeem checked the run flow excellently and refused to get hit as he leaked just 32 runs in his 10 overs and picked up four wickets to justify his recent India callup in the South Africa Test series.

For India 'B', Mohammed Siraj also picked up two wickets.