Kapil Dev's Double Thumbs Up Sign After A Successful Angioplasty

India's first World Cup-winning cricket captain Kapil Dev is well on road to recovery after a successful emergency coronary angioplasty, and this is evident from a photo in which the legendary all-rounder is seen flashing a double thumbs-up sign from his hospital bed. 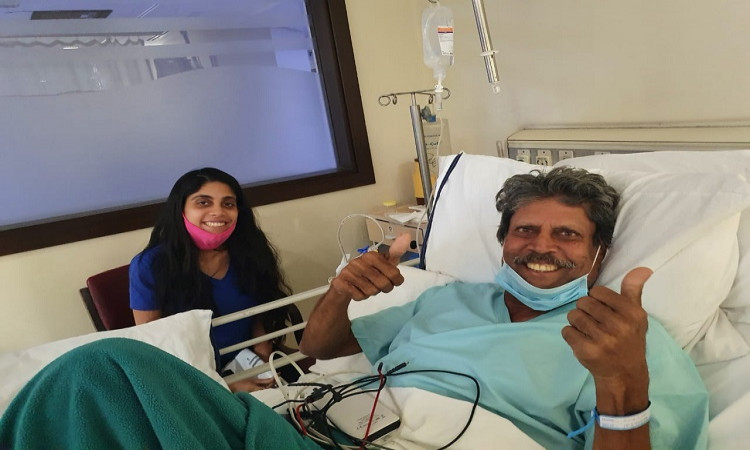 In the photo, 61-year-old Kapil's daughter Amiya is also seen sitting on a chair beside his hospital bed smiling while he is posing for the camera. Kapil, according to a bulletin from Fortis-Escorts Heart Institute Hospital in south Delhi on Friday, was in the Intensive Care Unit and would be discharged in a couple of days.

The 'Haryana Hurricane', as Kapil is often called, himself tweeted late on Friday night to express his gratitude to his fans and friends. "Thank you all for all the love and concern. I am overwhelmed with the good wishes and well on the road to recovery," he wrote.

Kapil was operated upon on Thursday-Friday night after he complained of acute chest pain.

That Kapil was in great spirits was also evident from a message he wrote on Friday on a WhatsApp group exclusively for the members of the 1983 World Cup-winning team.

"Hi everyone. I'm in good spirits and doing well. On the way to a speedy recovery. Can't wait to return to my golf game. You guys are my family. Thank you," Kapil wrote in reply to the wishes of his former India team-mates who did the unthinkable by winning the World Cup against all odds in England.

Kapil was admitted to the Fortis-Escorts Heart Institute Hospital in south Delhi at around 1 a.m. on Thursday-Friday, and Dr Atul Mathur, Director of Cardiology Department successfully performed an emergency coronary angioplasty.

Angioplasty is a procedure to restore blood flow through the artery.

Apart from the world Test wickets record that Kapil held for over six years, until March 2000, his other big achievement was to lead in limited-overs cricket minnows India to World Cup triumph in 1983.

In an illustrious international career that ran from 1978 to 1994, Kapil captured 434 wickets and scored 5,248 runs in 131 Tests, and bagged 253 wickets, and made 3,783 runs in 225 ODIs. He was best known for his potent outswinger that accounted for many batting stalwarts.

As captain, Kapil also led India to triumph in the four-nation Rothmans Cup in Sharjah in 1985.

Kapil has won almost all the top sports and civil awards in India and also abroad. In 1979-80, the Indian government conferred on him the Arjuna Award, the Padma Shri in 1982, and the Padma Bhushan in 1991.

The International Cricket Council inducted him in its Hall of Fame in 2010 while the Board of Control for Cricket in India honored him with its highest accolade, the CK Nayudu Lifetime Achievement award, in 2013.

Wisden considered the final word on cricket, picked him among its Five Cricketers of the Year in its 1983 almanac, and in 2002 it chose him as the Indian Cricketer of the 20th Century in a one-off award.