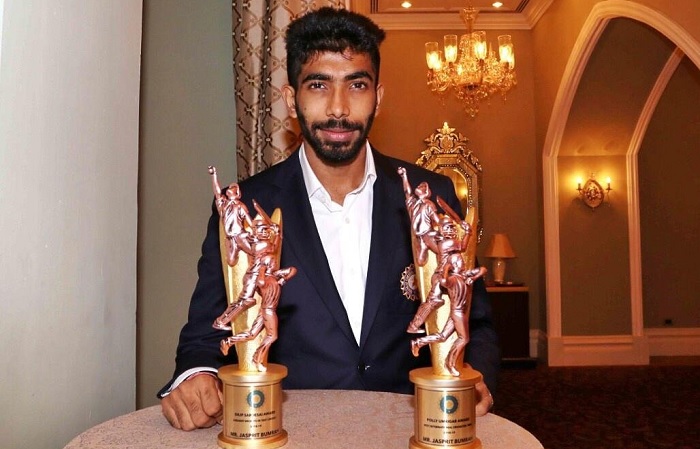 Currently ranked as the world no.1 ODI bowler, Bumrah had made his Test debut during India's tour of South Africa in January 2018.

He has picjed up five-wicket hauls in South Africa, England, Australia and the West Indies to become the first and only Asian bowler to achieve the milestone.

Leg-spinner Poonam Yadav, who had recently received the Arjuna Award, was given the best international cricketer (women) award.

Teenager Shafali Verma (15) won a couple of awards for her outstanding performances.

She was awarded the best international debutant and best woman cricketer in junior domestic cricket. In nine T20 matches, Shafali scored 222 runs at 27.75 with two half-centuries.

India opener Smriti Mandhana was awarded for being the highest run-getter in ODIs (349 runs in six matches at 69.80 with three half-centuries and one century), while Jhulan Goswami was acknowledged for taking the most number of wickets (11 wickets in six matches with one four-wicket haul).

Test specialist Cheteshwar Pujara was awarded with the Dilip Sardesai award for being the highest run-getter in Tests during the 2018-19 period. Pujara had amassed 677 runs from eight Tests at 52.07.

India Test opener Mayank Agarwal, who hogged the limelight for consecutive good scores in the recent past, was bestowed with the award for best international debut in the men's category while Shafali Verma received the award in the women's category.

In nine Tests, Mayank had scored 872 runs at 67.07 with three centuries and and as may half-centuries. Shafali had accumulated 222 runs from nine T20Is.

All-rounder Shivam Dube was given the Lala Amarnath award for being the best all-rounder in Ranji Trophy for the 2018-19 season. Dube scored 632 runs at 52.67 in eight matches with two centuries and three half-centuries besides taking 23 wickets at 23.21.

Nitish Rana bagged the best all-rounder award in domestic limited overs competitions. Rana amassed 443 runs at 49.22 in 10 matches with one century and three half-centuries and scalped eight wickets at 27.50.

Milind Kumar and Ashutosh Aman were awarded for being highest run getter and highest wicket taker, respectively, in the Ranji Trophy.

BCCI President Sourav Ganguly said: "The BCCI Awards is our way of recognising the finest on-field performances right from the age group to senior level and also honour our legends."