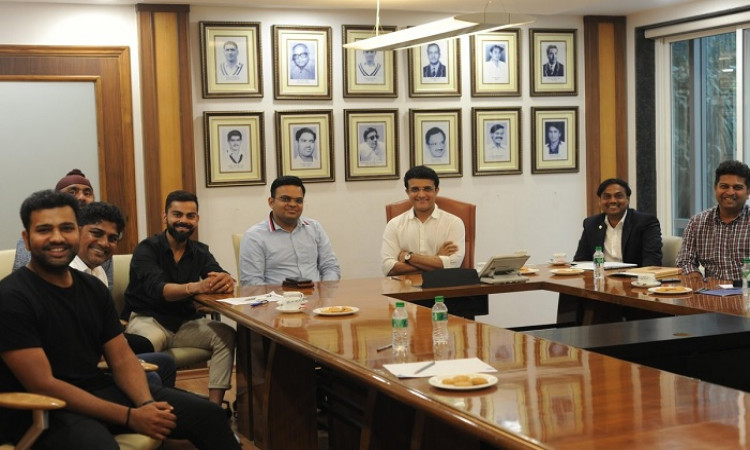 Kolkata, Nov 2: Board of Control for Cricket in India (BCCI) President Sourav Ganguly on Saturday expressed surprise at India failing to agree to play a Test match under lights in Adelaide last year against Australia, saying it took skipper Virat Kohli just three seconds to say "yes" to Day-Night Tests.

Ganguly met Kohli on October 24, a day after he was formally announced as the president of BCCI, and the first thing he said was the need to play pink ball Tests.

"I don't know what was the reason they did not want to play (Adelaide Day-Night Test). I met Virat on the 24th, met him for an hour and the first question was that we need to have D/N Test cricket. The answer in three seconds was 'yes let's go ahead and do it'," Ganguly said at the launch of former international umpire Simon Taufel's book titled "Finding The Gaps" here.

"So I really don't know what's happened in the past. What is the reason and who was involved in the decision. But I found him absolutely acceptable to play D-N test matches. He realises I think that empty stands in Test matches is not the right way forward," said the former India captain.

India will take on Bangladesh in their first ever Day-Night Test at Eden Gardens from November 22-26.

India had refused to play a D-N Test at Adelaide in 2018 and has since not been very keen on the idea until newly-elected BCCI President Ganguly underlined the need to play Test cricket under lights to pull crowds.

"When India went to Australia, my 100th Test match was a Boxing Day Test at MCG. There were 70,000 people watching the game. You should see the Ashes when Australia plays England, not one seat in empty. When India played Australia in 2001 at Eden Gardens, there were 1,50,000 people watching. Now people's life has changed society has changed. You can't leave offices to watch test matches so adaptability is most important. Most number of times, change is good. Sometimes when you are forced to change and come out of your comfort zone, it's better," Ganguly said.

Ganguly added that Test cricket needs to be marketed in the right way for it to get back on its feet, and with the D-N test here, he hopes it will be back to where it was in India.

In the recently concluded South Africa home series, empty stands were a regular feature as India whitewashed the Proteas 3-0.

"Some of the teams I have played against, all top players. I was disappointed to see the South Africa team this time. Test cricket needs to be marketed a lot more than what we do at the moment. I could not believe that Australia were hosting India in a Test match at Adelaide, and Big Bash was going on in another part of the country at that time. It's poor organisation. I know T20 cricket brings crowds, you see the IPL. But I think proper management of Test cricket will bring it back to where it was," Ganguly said.

"Hopefully it's a start for India. It's the place to play the game in the world. With the fans' attention and love and with this I think test cricket will be back on its feat," he added.

In an interview to IANS, former umpire Simon Taufel had also backed Ganguly's views regarding pink ball tests being the way forward.

"High performance modern business is about pushing the envelope. It's about going places where we haven't been before and taking educated risks. We take that based on research and what the customers want," Taufel told IANS in an interview here on Saturday.

"We know if we don't do anything about Test cricket, it's under threat. It is facing some challenges. We could be doing a lot more to promote Test cricket. We need to explore pink ball in that aspect," Taufel said.

"Sometimes you need to try things to know whether they work or they don't. Pink ball cricket is something that needs to be explored before we take it off the table," said the 48-year-old Australian, widely regarded as one of cricket's best-ever umpires.

Taufel was present when the first pink ball Test was played in 2015 between Australia and New Zealand in Adelaide.

"It works in some countries and some environments. In Adelaide for example it's been a tremendous success," he said.