Kolkata Knight Riders almost pulled off an incredible run chase but Chennai Super Kings kept their cool to win the 15th match of IPL 2021 by 18 runs on Wednesday. 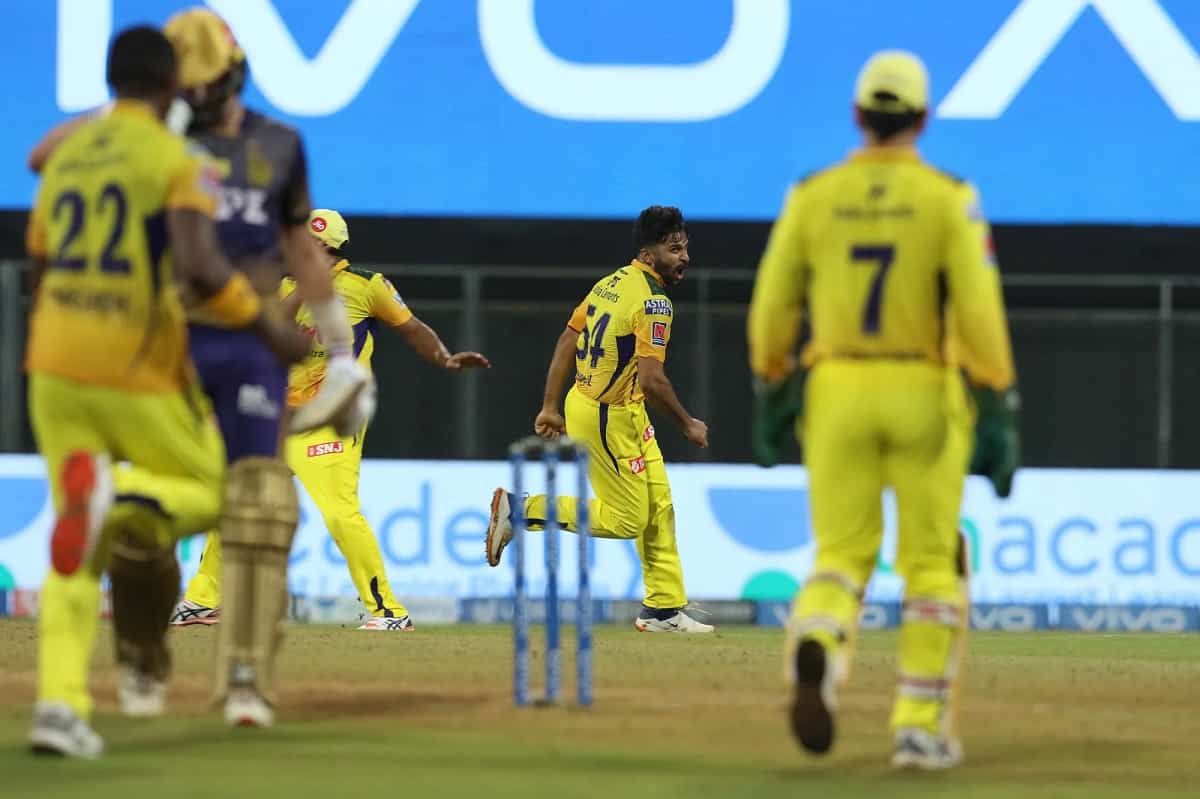 Chasing a massive total of 221, KKR had the worst start. Deepak Chahar ran riot in Kolkata's top-order as they got reduced to 31/5 inside the powerplay. Chahar finished his bowling figures with 4/29, thinking that the job has been done.

However, Dinesh Karthik and Andre Russell had some other plans. The two never really looked in pressure and combined to add 81 runs for the sixth wicket in just 39 balls.

Russell was in a red-hot form as he smacked 54 from 22 balls with the help of three fours and six sixes. His innings ended bizarrely as he left alone a Sam Curran's ball that went on to hit his leg stump.

Karthik from the other end kept on finding the boundaries but he too got out after scoring 40 off 24. His wicket meant that CSK had to just run through the tail-enders.

However, Pat Cummins made them count every ball. Cummins, out of nowhere, smacked Curran for 30 runs in an over which included four sixes and a four. He kept on running hard and finding the boundaries as he too hit a fifty.

The equation went down to 20 runs from the last over with only one wicket left for KKR, but Cummins was on strike. He smashed the ball down the ground and had no option but to run a second run. Deepak Chahar's accurate throw meant that Prasidh Krishna and Kolkata Knight Riders fell short of the target.

Pat Cummins remained unbeaten on 66 which he made in just 34 balls with the help of four fours and six sixes.

Earlier, Chennai was asked to bat first. The two CSK openers, who haven't had a successful stand yet, gave a perfect start. The pair smashed 54 runs in the powerplay without losing any wicket and kept on slogging even after the restrictions were lifted.

Ruturaj Gaikwad and Faf du Plessis added 115 runs in 77 balls for the opening wicket. Gaikwad hit 64 from 42 balls with the help of six fours and four sixes.

The next batsman Moeen Ali played his usual aggressive knock to keep the momentum going. He hit a quickfire 25 from 12 to add 50 more runs along with du Plessis, who was absolutely smoking them at the other end.

MS Dhoni made a quick 17 from 8 balls with the help of two fours and a six before Ravindra Jadeja cleared the final ball of the innings and the only ball he faced for a six.

Du Plessis missed out on a well-deserved century as he remained unbeaten on 95 at the other end.

After this win, Chennai Super Kings have jumped to the top spot in the points table while Kolkata Knight Riders is struggling at 6th place.