IPL 2020: How Rahul Tewatia 'Kept Faith' And Exploded When Rajasthan Royals Required The Most

With 51 needed of the last three overs and Sanju Samson dismissed at 85, the game as all but gone for the Rajasthan Royals against Kings XI Punjab. Left-handed Rahul Tewatia -- who came out to bat at two-drop chasing KXIP's 223 -- had been struggling to get going. 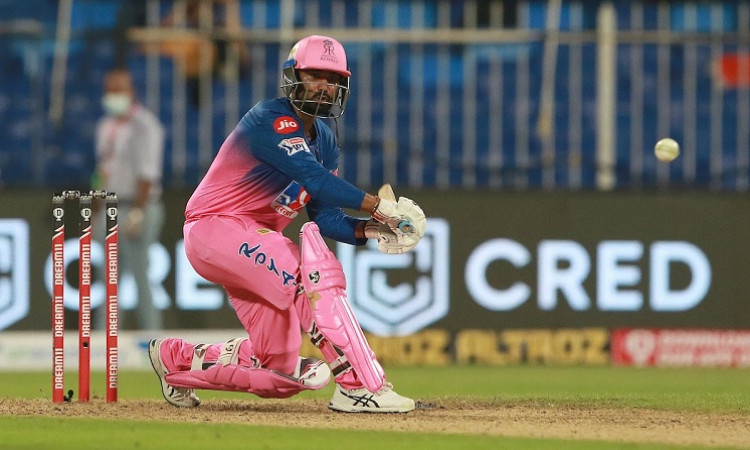 He had faced eight balls from Ravi Bishnoi, six of which were dots. He did manage to get one six but was lagging far behind after scoring 17 off his first 23 deliveries.

"They were the worst 20 balls I have ever played," Tewatia would go on to say after the match on Sunday.

The Royals dugout looked on curiously as the match appeared to be slipping away.

"I was hitting the ball really well in the nets so I had the belief in myself. I was not hitting the ball well initially then I saw in the dugout, everybody was curious because they know that I can hit the ball long. At once I thought that I have to believe in myself and it was a matter of just one six," said the left-handed batsman.

On the other hand, the Kings XI squad was all ecstatic and waiting what would have been an incredible win (eventually it didn't happen).

"Keep the faith. The most amazing things in life tend to happen right at the moment you're about to give up hope," Tewatia had said on Twitter way back in 2017.

And that's what he did at the Sharjah Cricket Stadium -- kept faith. In the 18th over, Tewatia brought out the big hitting that the Royals think tank took the risk on and hit five maximums to take 30 off the six deliveries bowled by Sheldon Cottrell.

Cottrell steamed in and gave him a bouncer to deal with early on and Tewatia pulled it over long leg. The West Indian went for another short-pitched delivery and Tewatia sent it over square. Then Cottrell pitched it up and Tewatia put it over long-off and he then sent the next ball, a wide full toss, over midwicket.

Tewatia, however, missed out on the six sixes by one, being unable to connect the fifth ball. Then, the sixth, a wide length ball, was sent sailing over midwicket.

"In the over of Sheldon Cottrell, I did not think about hitting five sixes, I was just thinking of hitting three sixes and I was hoping to take 24-26 runs from that over. When I was able to connect one ball, I went for one more," Tewatia told Samson in a video posted on iplt20.com.

The 27-year-old spinner, who had played an instrumental role in Royals' 16-run win over Chennai Super Kings earlier in the tournament by picking three wickets, went on to hit another six before finally falling to Mohammad Shami, contributing with 53 from 31 balls, an innings studded with seven monstrous sixes.

Jofra Archer, who was supposed to win the match for the Royals with the ball, then joined the party and along with Tom Curran, saw Royals register the highest successful chase in IPL history.