A brilliant 42-ball 56 from debutant Devdutt Padikkal and a three-wicket burst from Yuzvendra Chahal that caused a spectacular batting collapse helped Royal Challengers Bangalore (RCB) beat the Sunrisers Hyderabad (SRH) by 10 runs in their opening game of the Indian Premier League (IPL) here on Monday evening. 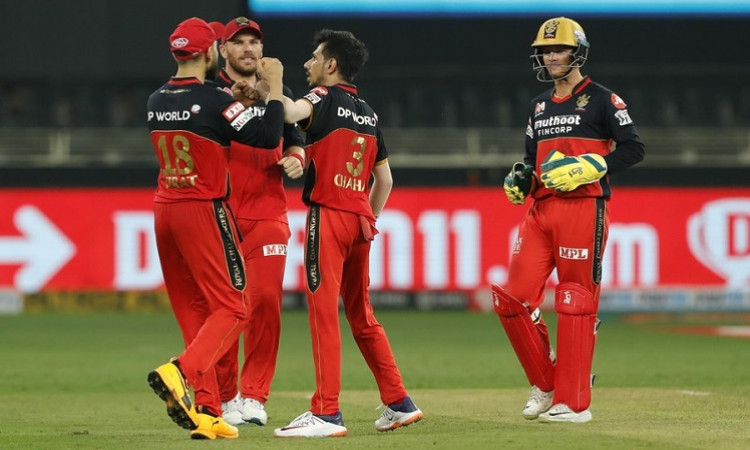 The RCB posted 163/5 in their allotted 20 overs, after the SRH captain David Warner won the toss and opted to bowl at the Dubai International Cricket Stadium. Chasing, the SRH were bundled out for 153 in 19.4 overs.

Chasing the target, the SRH lost their opener Warner quickly as the unlucky opener managed only six from as many balls. Off the fourth delivery of the second over, bowled by Umesh Yadav, Warner was run out at the non-striker's end off a shot played by Bairstow.

After Warner, Manish Pandey joined Bairstow in the middle and the pair played some sensible cricket to take their side past the 50-run mark in 6.2 overs. Just when the SRH were approaching the three-digit mark, leg-spinner Chahal cut short Pandey's stay in the middle, sending him back in the 12th over with the scorecard reading 89/2.

In his next over, Chahal struck again, this time getting rid of a dangerous looking Bairstow, whose 61-run knock was laced with six boundaries and two sixes. To complicate things for the SRH, Chahal took no time in striking again as this time he accounted for Vijay Shankar off the very next delivery. Shankar departed without troubling the scorers.

Shivam Dube, too, joined the party as he sent back debutant Priyam Garg (12) in the 17th over, leaving the SRH reeling at 129/5.

Off the very next delivery, a mid-pitch collision between new batsman Abhishek Sharma (7) and Rashid Khan resulted in the former getting out. This put the SRH in deep trouble, with 29 runs still needed for victory. But they collapsed spectacularly and were all out for 153 in 19.4 overs.

Earlier, debutant Padikkal (56) and AB de Villiers (51) smashed half-centuries, powering the RCB to 163 for five in 20 overs. The RCB were off to a flying start, thanks to Padikkal and Aaron Finch as the opening pair accumulated 53 runs in the first six overs of powerplay.

Padikkal, an attacking batsman who had hogged limelight after amassing 580 runs in the T20 Syed Mushtaq Ali Trophy last year, kept his skipper's faith intact as his explosive batting impressed everyone. The 20-year-old batsman picked up boundaries off every lose delivery and kept the scorers busy.

The openers comfortably took their side to 86 at the end of first 10 overs of play. It was Vijay Shankar who finally came up with a breakthrough for the SRH, breaking the 90-run partnership in the 11th over. While trying to switch gears, an inside edge off a Shankar delivery was enough to dislodge Padikkal's stumps. Padikkal's knock, which came off 42 balls, contained eight boundaries.

Off the very next ball, Abhishek Sharma trapped Finch before the wickets. The RCB skipper Kohli was next in. However, the run-machine's stay in the middle didn't last long as he managed 14 off 13 balls before T Natarajan sent him back to the dugout.

Despite the back to back blows, de Villiers kept scoring at the other end and before the SRH could manage another breakthrough, the South African batter swiftly changed gears, hammering two consecutive maximums in the second last over to help his side cross the 150-run mark.

de Villiers's knock was laced with four boundaries and two sixes and while trying to accelerate the run-rate, he was run out in the final over as his side posted 163/4 in the allotted 20 overs.