Kolkata Knight Riders' (KKR) architect-turned-cricketer Varun Chakravarthy on Saturday turned the heat on Delhi Capitals (DC) with figures of five for 20. It would have taken something special to upstage the scintillating batting performance put up by Nitish Rana and Sunil Narine to propel KKR to 194/6 wickets and Chakravarthy ended up doing enough to pip the pair to the Player of the Match award. 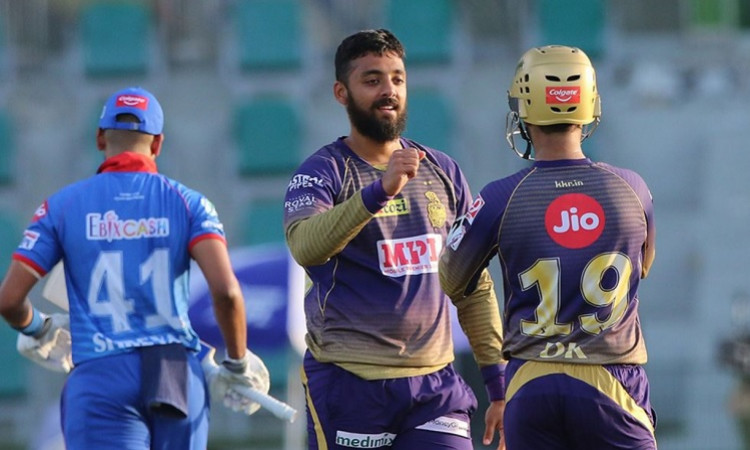 "I have been working hard, but the motivation and faith has come from a lot of people around me. Around 2015, when I was not making a lot of money [the switch from being an architect to becoming a cricketer], was freelancing and wasn't able to meet my needs, I thought I would do something different, that's when I turned to cricket. I still do it, I like that as well [being an architect]," Chakravarthy said after the match.

Also Read: IPL 2020: I Was Positive And So Was The Team, Says KL Rahul

"Want to thank my mother, Hema Malini, father Vinod Chakravarthy and my fiancée Neha, the team physios, DK bhai and Abhishek Nayar, for their support. I pretty much started my spin bowling in 2018, that's when I got my breakthrough in TNPL [Tamil Nadu Premier League], it's been high and lows -- last year, I didn't get many chances and I injured myself, I'm grateful for making a comeback this year," he said.

Chasing a target of 195 in Abu Dhabi is no mean feat but it looked DC may have been set on course to do just that when captain Shreyas Iyer and Rishabh Pant were going big after the powerplay. The pair had put up 63 off 55 balls for the third wicket and were accelerating when Chakravarthy came in and turned the game on its head.

Chakravarthy, 29, first got Pant in the 12th over before getting Shreyas and Shimron Hetmyer off consecutive balls in the 14th. He then got Marcus Stoinis to practically end DC's hopes before dismissing Axar Patel for good measure.

The Tamil Nadu leg-spinner has got a second wind this IPL season after missing the last season -- his first -- due to an injury. He had proven his worth in KKR's previous game this season against DC, taking a wicket and conceding just 13 in the two powerplay overs at the Sharjah ground that has small boundaries.

Last year, Chakravarthy had earned a whopping Rs.8.4 crore from Kings XI Punjab on the back of his performances in the Tamil Nadu Premier League (TNPL), but was later laid low by the injury. He could play just one game in last year's edition. This year, he is back, but in different colours and his wickets will only add to his reputation.