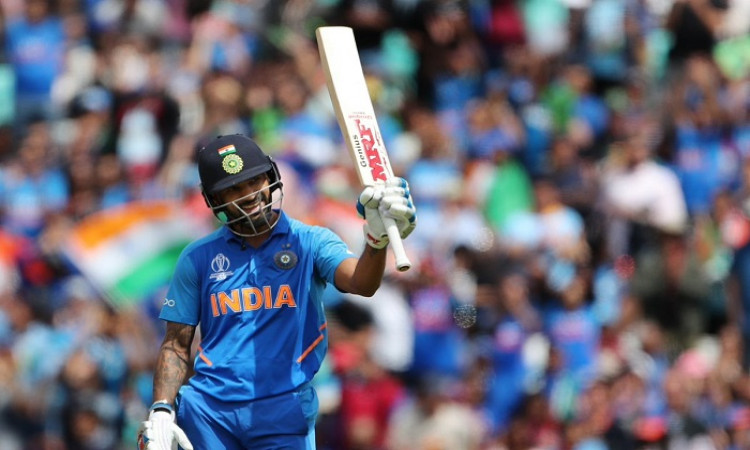 New Delhi, June 11 (CRICKETNMORE):  Injured India opener Shikhar Dhawan will be under observation as he strives to recover from a thumb fracture he picked up during the Autralia game, the BCCI said on Tuesday.

In a media group, the BCCI said, "Team India opening batsman Shikhar Dhawan is presently under the observation of the BCCI medical team. The team management has decided that Dhawan will continue to be in England and his progress will be monitored.

"Dhawan sustained an injury on the back of his left hand in the region between the index finger and thumb during the league match against Australia."

Dhawan, who roared back to form with a belligerent 117 in India's last World Cup game against the Aussies on Sunday, got hit on the thumb by a Pat Cummins delivery during his 109-ball knock. While he continued to bat with the injury, Ravindra Jadeja took over when India came out to field.

IANS has learnt that the fracture line has only been detected on CT scan and no fracture was detected post X-ray.

This saw Dhawan travel to Leeds for further consultation. It is believed that while the team can apply for a replacement any time, they want to be certain on Dhawan's injury status and recovery time before deciding on whether to call a replacement.

The Indian selectors had earlier named Ambati Rayudu, Rishabh Pant, Navdeep Saini, Ishant Sharma and Axar Patel as the reserves and while they can pick anyone from even outside the list, it is believed that Pant is the frontrunner as K.L. Rahul is expected to open the innings and whoever comes in will fit into the middle-order.

Going into the game against Australia at The Oval, Dhawan didn't have the best of starts to this year's World Cup, but back at his favourite hunting ground, the opener looked in fine spirit as he hit his first hundred of the tournament.

Dhawan's loss is colossal for Virat Kohli and Co., especially with the left-hander boasting of an exceptional record in ICC tournaments.

In 20 matches across the World Cup and the Champions Trophy, Dhawan has 1,238 runs with six hundreds and four fifties, averaging 65.15 with a strike rate of 98.25.

India will next take on New Zealand on Thursday before squaring off with arch-rivals Pakistan on Sunday.