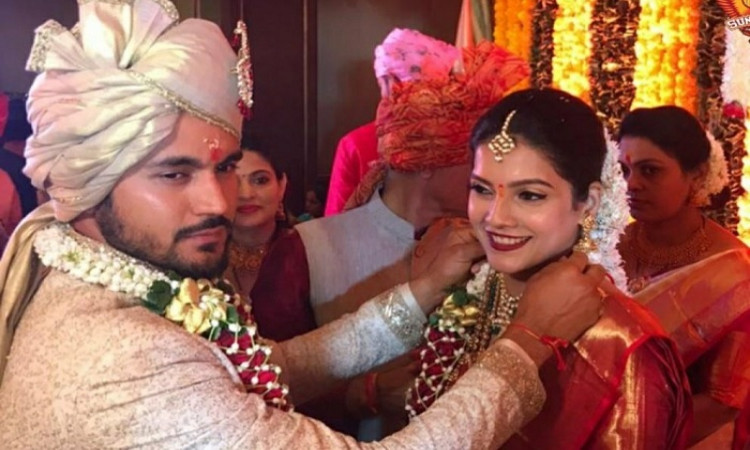 New Delhi, Dec 2:  Hours after leading Karnataka to the title in the Syed Mushtaq Ali Trophy on Sunday, India batsman Manish Pandey headed to Mumbai to get married to Ashrita Shetty. 26-year-old Ashrita is an actress in southern films, who made her debut in the 2012 Tulu film, "Telikada Bolli".

Manish in fact made the news known at the post-match presentation ceremony on Sunday when he said that ahead of the test that awaits in the limited-overs series against West Indies, he had the marriage test on Monday.

"Looking forward to the India series, but before that there is another important series for me, I am getting married tomorrow," he smiled.

Manish played a key role in the final against Tamil Nadu and hit a 45-ball 60 to help Karnataka post 180. Tamil Nadu fell 1 run short in the chase.

As for Ashrita, she has worked in four other films over the past seven years - "Udhayam NH4", "Oru Kanniyum Moonu Kalavaanikalum", "Indrajith" and the unreleased "Naan Than Shiva".

Before her film debut, Ashrita participated in a beauty contest aimed at selecting a fresh face for a cosmetic care brand in 2010. She won the contest, which opened up doors for a stint in TV commercials.

Around this time, she was signed up to play a lead role in Manimaran's 2013 Tamil romantic thriller "Udhayam NH4", opposite Siddharth. The film featured Kay Kay Menon in a pivotal role.

She was last seen in the 2017 Tamil action drama "Indrajith" that had Gautam Karthik in the title role.