Christchurch, March 1:  New Zealand fast bowler Trent Boult led the way as the hosts wrested back control from India on a topsy-turvy second day of the second Test between the two sides. On a day when 16 wickets fell in all, India ended on 90/6, trailing New Zealand by 97 runs, while captain and star batsman Virat Kohli was dismissed on 14. 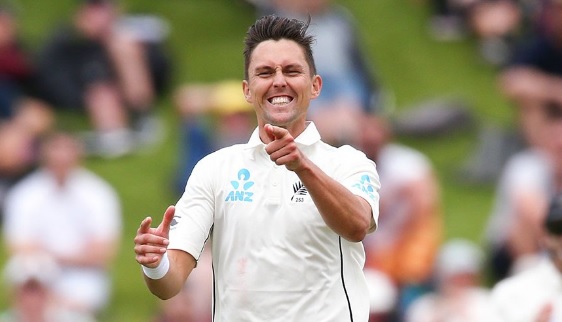 It was the end of a horror series for Kohli in which he scored 2, 19 and 3 before this. "He (Kohli) is one of the best players in the world, no doubt about that," said Boult.

"Obviously, he is a big player for them and we just tried to put enough pressure on him, keep him quiet and soak up those boundary balls, and it was nice to see him make a few errors. We were lucky to get two that lined up and hit him on the pads nicely and it was a good feeling to see the back of him," he added.

The series has been a tough one for Indian batsmen with the 242 that they scored in the first innings of the Test being the only time thus far that they crossed 200. Boult said that the visitors took time to get adjusted to the pitches on offer in Wellington and Christchurch.

"Probably, they are used to playing on low and slow pitches in India and it took time for them to get adjusted. Just like if I bowl in India, it will be foreign conditions for me," he said.

Sunday proved to be a tough one for both sets of batsmen with another lower order effort taking New Zealand close to the Indian first innings total. They were 153/7 at one point.

"Sixteen wickets, I am not sure if that's up there with a record in Test cricket in terms of day two but the bowlers obviously pitched the ball up nicely and got rewards. Seeing the ball move around like it did, I feel we are in a decent position," said Boult.

"We are all enjoying hunting out there as a pack, getting the ball to move around. I think the bowling unit is very clear about how they are trying to target the opposition."