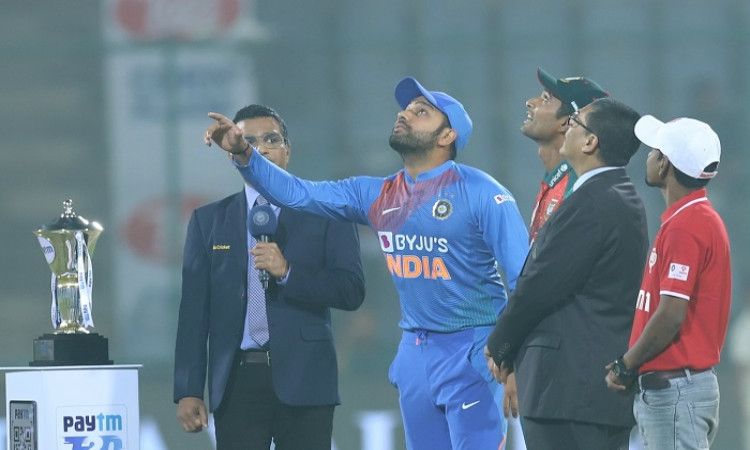 Rajkot, Nov 7: India's stand-in captain Rohit Sharma won the toss and elected to field first against Bangladesh in the second T20 here on Thursday. After winning the first T20 in the national capital by seven runs, Bangladesh have gone in with an unchanged squad. Even India have decided to play the same XI.

"Rajkot has always been a good track despite some cracks. Think there may be dew later, so life will be easier for the batsmen. Aware of our poor chasing record, but that's not why. We just want to do something different from the last game. Priority is always to win the game first. The set of boys we have are new and I want to make them comfortable.

"When you have a score in front of you, then the batsmen know what sort of tempo they need to bat with. We have all the stats in our mind and we know how we bat first. But we want to do well here. No changes because our performances in the last game were right up there, barring a few mistakes," Rohit said at the toss.

"I don't think so (about toss being a factor). Pitch looks really hard, nice to bat on. I would have loved to bowl first too but now will want to put some runs on the board. It's a good oppportunity for all of us (to win the series). Need put all these thoughts aside and do the basics well. Important for the senior players to do well. Even the youngsters have done well," Bangladesh skipper Mahmudullah said.

It rained heavily on Wednesday night, but the weather got better as the day progressed on Thursday.