Team India are set to tour Bangladesh after 7 years, with the 1st ODI to be played on December 4th (Sunday).

Team India are set to tour Bangladesh after 7 years, with the 1st ODI to be played on December 4th (Sunday).


IND V NZ, 3rd ODI: Felt That We Bowled A Bit On The Shorter Side, Says Shikhar Dhawan

With the upcoming ODI World Cup 2023 in sight, regulars of team India return to the 50-over format as India gear up to face off against Bangladesh in the 3-match ODI series. Being the hosts of World Cup 2023, India have already qualified for the ODI World Cup Super League 2023 while Bangladesh have also confirmed their automatic qualification with 12 wins in 18 CWCSL games.

After missing the tour to New Zealand, Rohit Sharma, Virat Kohli and KL Rahul have been included in the ODI squad against Bangladesh. Shikhar Dhawan has scored the most runs for India in ODIs this year, with 670 runs to his name in 19 matches including 6 half-centuries. Amongst the players selected for the tour, Shreyas Iyer has the next most runs with 615 runs in 12 innings at an average of 61.50. While Shubman Gill who has scored 638 runs this year in ODIs at an average of 70.88, has been left out.

Only three Indian batters have scored an ODI century this year – Shikhar Dhawan, Shubman Gill and Rishabh Pant. Rajat Patidar and Rahul Tripathi have also been given a spot in the squad, while all-rounder Shahbaz Ahmed has also been included.

The bowling department will comprise Shardul Thakur, Mohammed Siraj, Deepak Chahar, Umran Malik and Kuldeep Sen, while Shahbaz Ahmed, Washington Sundar and Axar Patel will form the spin attack. Surprisingly, India's top wicket-taker in ODIs this year, Yuzvendra Chahal has been left out and would have been a great option on Bangladesh's turning pitches. Amongst the players selected, Mohammed Siraj and Shardul Thakur have the joint highest ODI wickets for India this year – 18 scalps in 12 and 13 matches respectively.

However, Thakur's economy of 6 has been the worse after Avesh Khan amongst all Indian bowlers in ODIs this year. Deepak Chahar has picked up 9 scalps in 6 matches this year, Axar Patel has registered 8 wickets and Washington Sundar has 7 wickets to his name. Along with Umran Malik, who had a good debut series against New Zealand, Indian bowling attack would surely present a strong challenge against the home team Bangladesh.

For Bangladesh, Litton Das has been the top scorer in ODIs this year with 500 runs to his name in 10 matches at an average of 62.50. Bangladesh will miss their captain Tamim Iqbal in the series, who has also shown good form with 408 runs at an average of 79.68 while Afif Hossain (335 runs) and  Mamudullah (299) have also stepped up at times to strengthen the batting unit. Litton Das will lead the team in the absence of Tamim Iqbal.

In bowling, right arm off break bowler Mehidy Hasan Miraz has been the top wicket-taker with 20 wickets in 12 matches. Musftafizur Rahman (12 wickets), Shakib Al Hasan (8 wickets) along with Shoriful Islam, Hasan Mahmud, Ebadot Hossain and Nasum Ahmed will form the bowling attack against a strong team India. Bangladesh will miss one of their top wicket-takers in ODIs this year, Taskin Ahmed (12 wickets) who has been ruled out of the 1st ODI.

India will start off as favourites to win the 1st ODI against Bangladesh.

IND vs BAN 1st ODI: Where to Watch? 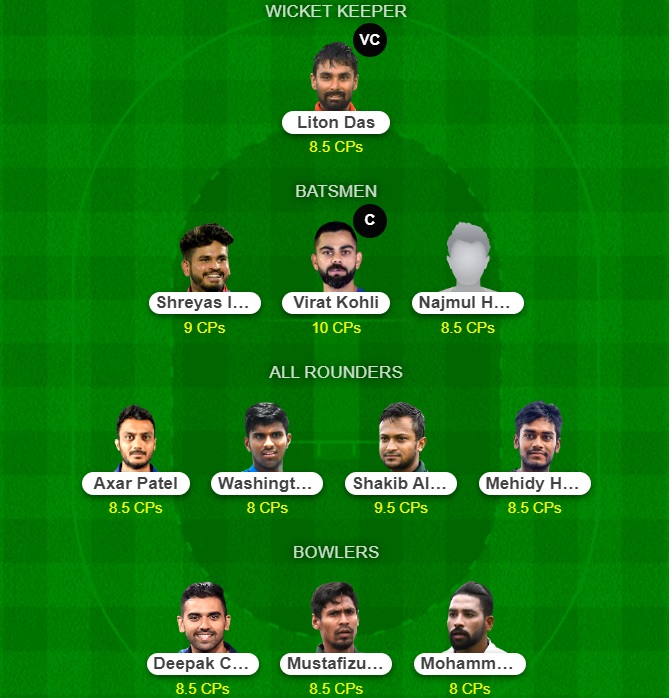 Wellington Vs Otago
Not Started