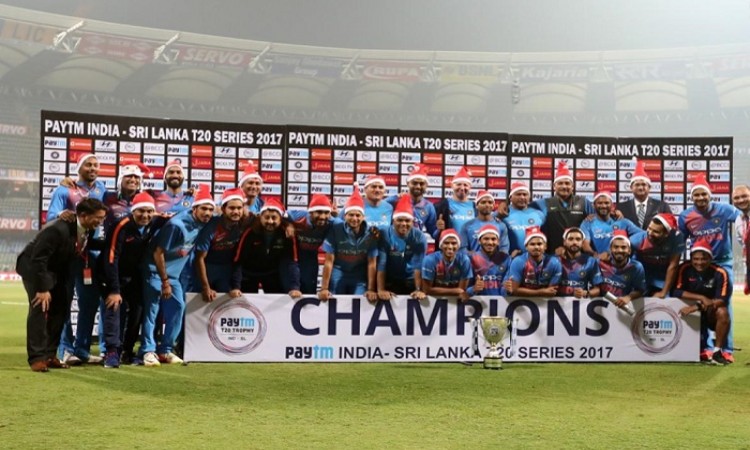 Mumbai, Dec 24 (Cricketnmore) India produced a dominant performance to hammer Sri Lanka by five wickets in the third and final Twenty20 International (T20I) and win the series 3-0 at the Wankhede Stadium here on Sunday.

Opting to bowl on winning the toss, India restricted Sri Lanka to 135/7.

The hosts then overcame the loss of early wickets to overhaul the target with four balls to spare.Pacers Dushmantha Chameera and Dasun Shanaka bagged two wickets each for Sri Lanka.

Chasing a modest target, India did not enjoy a great start as openers Lokesh Rahul and Rohit Sharma departed in quick succession.

Shreyas Iyer and Manish Pandey then added 42 runs between them in 36 deliveries to bring the Indian inings back on track.

The visitors struck back when Iyer was run out thanks to an excellent piece of fielding by Akila Dananjaya in the 14th over.

Hardik Pandya was also dismissed in the very next over as the Sri Lankans looked to make a strong comeback.

Pandya had attempted to guide a delivery from Dasun Shanaka through the empty third man region, but his miscued shot was safely grabbed by Sri Lanka wicket-keeper Niroshan Dickwella.

The hosts suffered another setback when the in-form Manish Pandey, who was their top scorer with 32 runs off 29 balls, was bowled by Dushmantha Chameera.

However, Dinesh Karthick and the veteran Mahendra Singh Dhoni came together to finish off the chase.

Earlier, India rode on a strong bowling performance to restrict Sri Lanka to a low total.

Asela Gunaratne (36 off 37 balls) and Dasun Shanaka (29 not out off 24) were the main contributors for the struggling visitors, who lost the first two T20Is in Cuttack and Indore.

Asked to bat by Indian skipper Rohit Sharma, Sri Lanka failed to click with their batting again. Both openers Niroshan Dickwella (1) and Upul Thranga (11) fell to left-arm seamer Jaydev Unadkat (2/15). While left-hander Dickwella was caught by Mohammad Siraj at mid-on, Tharanga played one to the hands of Hardik Pandya at deep midwicket, leaving his side at 18/3 in 3.3 overs.

In between these two wickets, debutant off-spinner Washington Sundar got Kusal Perera's catch of his own bowling as Sri Lanka struggled.

Gunaratne (36 off 37) and Sadeera Samarawickrama (21) seemed to be building a strong partnership until the latter mistimed Pandya and Dinesh Karthik caught it at mid-off, with Sri Lanka at 56/4 in 8.3 overs.

Gunaratne and Shanaka tried their best but struggled to score briskly. Gunaratne was the next one to be dismissed, pulling Pandya to the hands of Kuldeep at midwicket.