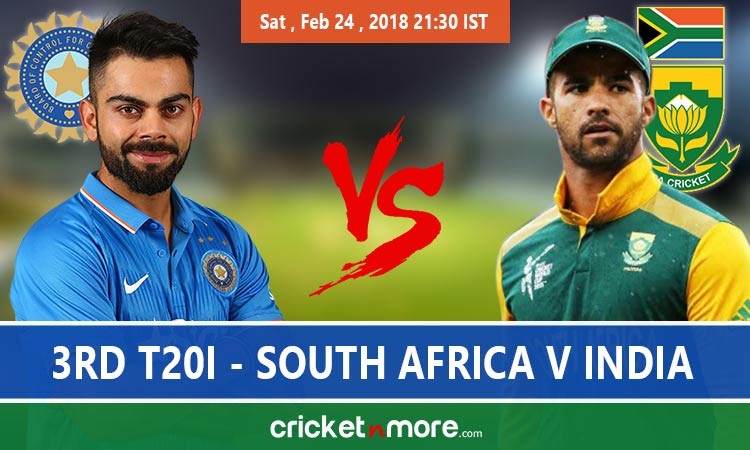 Cape Town, Feb 23 (CRICKETNMORE): India and South Africa will battle it out in the series-deciding third and final Twenty20 International (T20I) at the Newlands Stadium here on Saturday.

In the first game, a brilliant all-round show helped visitors beat hosts South Africa by 28 runs at Johannesburg. In the second game, South Africa, who lost the One-Day International (ODI) series 1-5, kept the T20I series alive by registering a six-wicket victory at Centurion.

The second match was a show of respective batting resolves by both sides, especially of their middle-order batsmen. While Manish Pandey (79 not out off 48) and Mahendra Singh Dhoni (52 not out off 28) responded for India, the hosts had to thank Heinrich Klaasen (69 off 30) and Jean-Paul Duminy (64 not out off 40) as they overhauled the visitors' total of 189/4 with six wickets and 1.2 overs to spare.

Klassen and Duminy were particularly harsh on leg-spinner Yuzvender Chahal (0/64) and left-arm medium pacer Jaydev Unadkat (2/42) in the second match. These two will be eager to bounce back with improved performances in the third match as captain Virat Kohli trusts them.

Kohli will depend on seamers Bhuvneshwar Kumar, if he is not rested, to provide the early breakthroughs. It is though not clear whether Kohli prefers to rest Bhuvneshwar, the way the team rested fellow pacer Jasprit Bumrah in the second match. Bhuvneshwar has played a lot in the tour which comes to end with the match on Saturday.