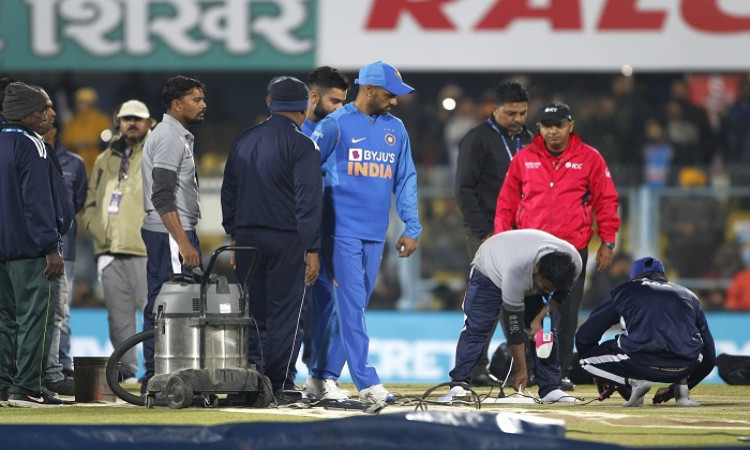 New Delhi, Jan 6:  Lack of proficiency among the groundstaff saw India's T20I game against Sri Lanka called off at the Barsapara Stadium in Guwahati on Sunday as water seeped in through the covers onto the pitch making it impossible for the game to be played. And the Indian team manager's report is set to bring this point up when the same is prepared and sent to the Board of Control for Cricket in India (BCCI) President Sourav Ganguly, Secretary Jay Shah and Treasurer Arun Dhumal.

Speaking to IANS, sources in the know of developments said that the local curators present at the stadium weren't adept at handling the situation and that is where it all went wrong. In fact, the same will be mentioned in the manager's report.

"See, the problem is that they removed the previous curator Mukut Kalita due to internal differences and now the new people in charge couldn't rise to the challenge as they weren't trained enough. How can you not be aware that there are holes in the covers? They just rolled the super sopper on it and the end result was that the water just seeped in and the rest was there for all to see.

"You cannot really blame BCCI chief curator Ashish Bhowmick for that. He isn't supposed to be aware if the covers have holes or not. The manager's report that will be sent to the secretary will have that mentioned that there should have been more awareness," the source said.

When contacted, Kalita though said that it was unfortunate as to what happened. "See, I resigned because I was going to be a father. I am currently working as a neutral curator with the BCCI and am in Pune for the Ranji Trophy game. Before this I was in Agartala and Kolkata. I did see what happened yesterday and it is unfortunate. Happens when it is a high-profile situation and you get nervous," he told IANS.

The three curators currently in charge at the stadium are BCCI qualified Ratul Das, Barshamangal Baruah and Bibhash Talukdar. BCCI chief curator Bhowmick was also present for the game and apart from the Indian team manager's report, the report of the match referee -- David Boon -- and the report of Bhowmick will also go to BCCI.

When contacted, Assam Cricket Association secretary Devajit Saikia said that it was a clear case of lack of time for the groundsmen that saw in the game being abandoned.

"Drying up process took longer time, in day time it would have been different. 6:30 p.m. the toss happened and at 6:50 p.m. there was heavy downpour and hailstorm. This continued till 7:53 p.m. One hour and three minutes there was heavy shower and umpires said we need to get the ground ready by 8:45 p.m. otherwise the match will be abandoned. 57 minutes was given to the groundsmen. If we had some more time, we could have readied the ground. There was dampness throughout the pitch due to reverse osmosis system and what was said on commentary, I can't comment on that," he told IANS.