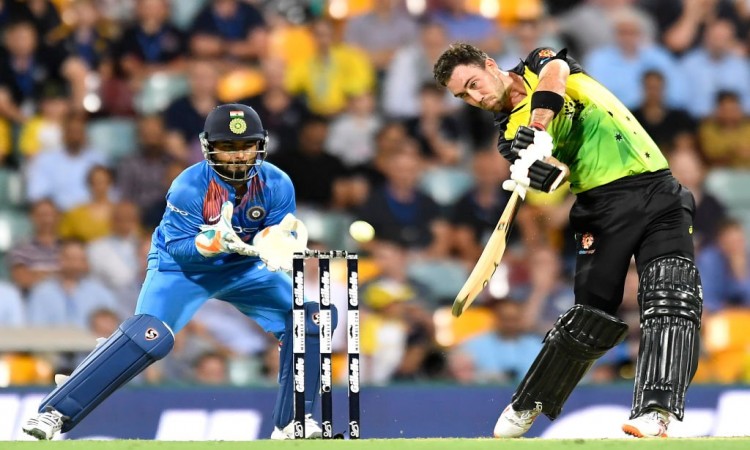 Brisbane, Nov 21 (CRICKETNMORE): Australia rode on a collective top order effort to post 158/4 in 17 overs before the target was readjusted to 174 according to the Duckworth-Lewis method in the rain-affected first T20 International against India at the Gabba here on Wednesday.

India now have to chase a challenging 174 from 17 overs after a spell of rain almost wasted an hour of play in the first session.

Australia were going hammer and tongs in the last few overs as Glenn Maxwell smashed 46 runs off just 26 deliveries and received equal support from Marcus Stoinis, who took 19 deliveries to clobber 33 runs.

Chinaman Kuldeep Yadav bagged a couple of wickets for 24 runs, however, Krunal Pandya, who remained wicketless, was hammered for 55 runs in his four overs.

Also, pacer Khaleel Ahmed was expensive, leaking 42 runs in his three overs but took one wicket.

Put in to bat, Australia started cautiously before losing opener D Arcy Short (7 off 12) on 24 runs in 4.1 overs.

Opener Aaron Finch (27) and Chris Lynn (37) then added 40 runs for the second wicket before Kuldeep struck to send back the Aussie skipper, leaving the hosts at 64/2 in 8.3 overs.

Australia were just able to add 11 runs to their overall score when the chinaman struck again to dismiss Lynn in the 11th over.

Maxwell and Stoinis then hammered every Indian bowler to all corners of the park as the duo added a crucial 78 runs for the fourth wicket.

The partnership took the hosts past the 150-run mark in just 16 overs before rain played spoilsport with Australia being in a commanding position with 153/3 from 16.1 overs.

After the rain break, the home side could only manage five runs from as many deliveries even as Jasprit Bumrah managed to send back Maxwell.