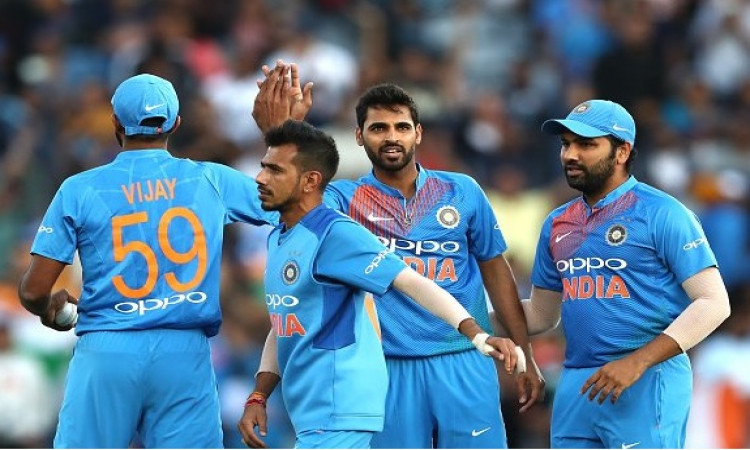 With this win, India have levelled the three match series 1-1.

Chasing 159, the Indian openers --Rohit and Dhawan-- played fearlessly and in no time the duo slammed 79 runs in 9.2 overs before Rohit was dismissed by spinner Ish Sodhi.

Rohit played brilliant shots all around the park to complete his half century. The Mumbai batsman played 29 balls and slammed three boundaries and four sixes.

In the very next over, Dhawan was also dismissed. He was caught by Colin de Grandhomme off Lockie Ferguson at backward point.

Rishabh Pant and Vijay Shankar (14) then tried to keep up the momentum set by the Indian openers but in te process Shankar fell prey to Daryl Mitchell. He was caught by Tim Southee at the boundary while trying for a six with the score at 118    in 14 overs.

Pant and wicketkeeper-batsman Mahendra Singh Dhoni then joined hands in the middle and completed the proceedings with ease.

Losing four wickets for just 50 runs in 7.5 overs, Taylor and Grandhomme forged a crucial 77-run partnership for the sixth wicket and helped their team post a good total.

Opting to bat, New Zealand started the proceedings cautiously but in the third over, Bhuvneshwar Kumar picked up Tim Seifert (12), who was the top scorer in the last match.

Colin Munro (12) and Kane Williamson (20) then came together. Munro was dismissed by spinner Krunal Pandya in the sixth over while trying to up the scoring rate. Krunal dismissed Daryl Mitchell (1) also in the same over.

With the scoreboard reading 43/3, Krunal came in again in the eighth over and dismissed Williamson. He was adjudged leg before wicket.

Taylor and Grandhomme then joined hands and played sensibly. The duo played some beautifully crafted shots in the process.

But just when things seemed good in the middle, Grandhomme was sent packing by all-rounder Hardik Pandya in the 16th over. Grandhomme played 28 balls and slammed one boundary and four sixes.

Unperturbed by the fall of wickets, Taylor kept on playing his shots but lack of support from the lower order batsmen cost him. He was run out by Vijay Shankar in the penultimate over. In his 32-ball stay, Taylor hit three boundaries.