India took a 1-0 lead in the three-match T20 series against Australia with an 11-run win at Canberra's Manuka Oval on Friday. 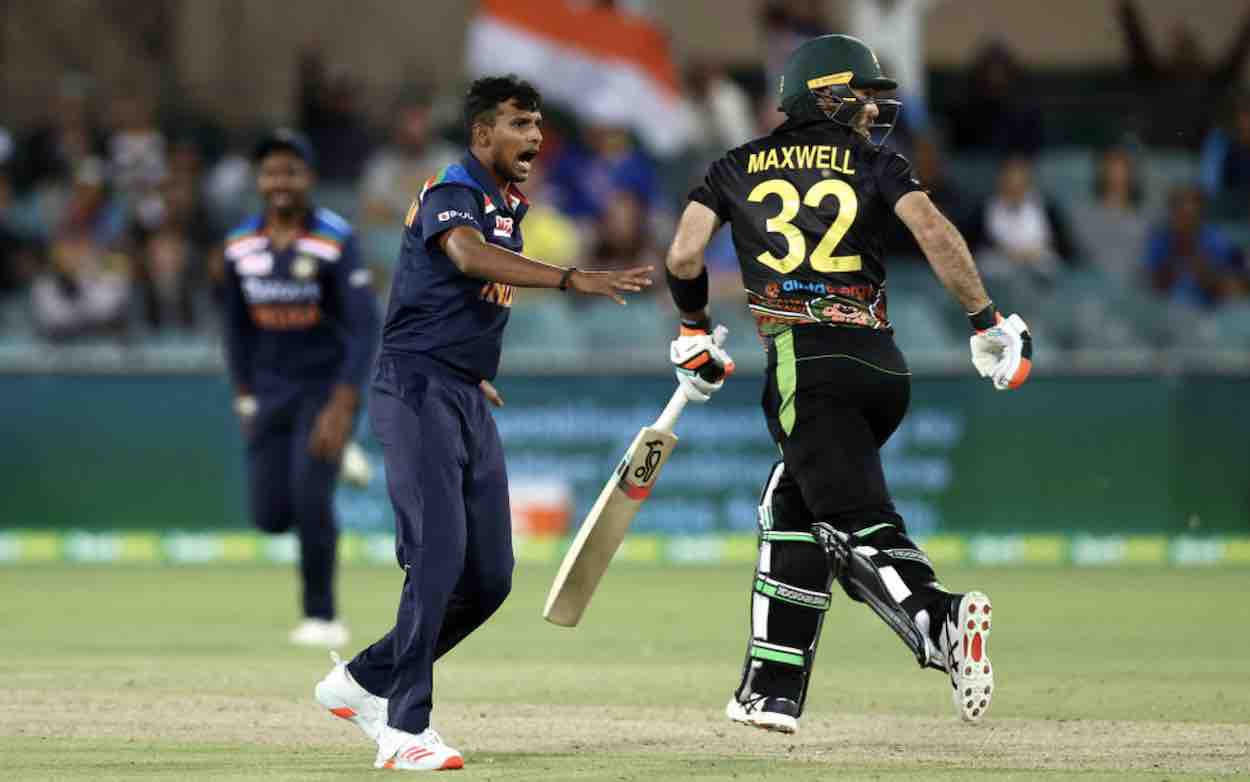 This was India's sixth win over Australia in 10 T20Is on Australian soil. The win helped India take 1-0 lead in the three-match T20I series. India had earlier lost the ODI series 1-2.  The next two matches will be played in Sydney on Sunday and Tuesday.

Chahal (3/25), who took the field as Jadeja could not play as a bowler in Australia's innings after taking a hit on his head off Mitchell Starc's short ball during his unbeaten knock of 23-ball 44, took the important wickets of skipper Aaron Finch, Steve Smith and Matthew Wade to dent the Aussie chase of 162.

The Australians had got off to a good start but Chahal removed Finch and Smith in his first two overs. He came back to get rid of Wade as the Aussie middle-order batsman looked for a big hit in the face of a rising required run rate. T Natarajan (3/30) was the other successful bowler as he picked the wickets of Glenn Maxwell, D'Arcy Short and Mitchell Starc.

The decision to bring in Chahal for Jadeja, who just before getting hit on his head was already limping did not please Australia coach Justin Langer who was seen discussing the issue with match referee David Boon.

Earlier, a well compiled half century from KL Rahul and the late onslaught from Jadeja helped India post 161.

Put into bat, India didn't have a great start as they lost a wicket early in the innings. Shikhar Dhawan was undone by an out-swinger in the third over bowled by Mitchell Starc and went back to the pavilion after scoring just one.

Skipper Virat Kohli, who came into bat next, then stitched a little partnership with Rahul and took the Indian score to 48. Just when the scoring rate seemed to be going up, Mitchell Swepson got the prized scalp of Kohli who was caught & bowled by the leg-spinner at his individual score of 9.

However, Rahul continued his good run and kept scoring boundaries whenever the Australian bowlers erred and along with Sanju Samson, took the Indian innings forward. Samson, during his stay at the wicket, played beautiful shots and made 23 off 15 before he was caught at covers while trying to hit a boundary against Moises Henriques.

Next batsman Manish Pandey (2 off 8) didn't stay long at the crease and was sent back to the dressing room by Adam Zampa.

Rahul, who was till then holding one end up, soon became the second scalp of Henriques who had the India wicketkeeper-batsman caught in the deep by Sean Abbott. Rahul smashed five fours and a six during his 40-ball innings.

Star all-rounder Hardik Pandya scored 16 off 15 before getting caught at long-off by Steve Smith while trying to go for a maximum against Henriques.

However, Jadeja who has been among the runs in recent times, provided India the much-needed impetus and scored 44 off just 23 balls, with the help of five fours and a six to help the team end their innings at 161/7.

Henriques was the pick of the Australian bowlers as he returned with figures of 3/22. Starc took two wickets while Zampa and Swepson picked one wicket apiece.