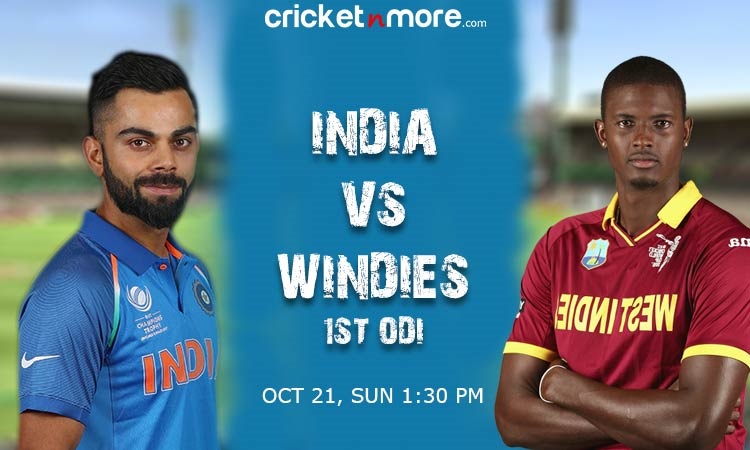 Guwahati, Oct 20 (CRICKETNMORE):  Hot favourites India will look to start their preparation for next year's 50-over World Cup in style and iron out the weaknesses in the side when they take on lowly West Indies in the five-match ODI series starting here on Sunday.

India will play 18-odd One-Day Internationals (ODI) before the World Cup in England.

Among the issues they would want to address, India's middle order is a problem especially the number four position where many have been tried but with little success.

Explosive wicketkeeper-batsman Rishabh Pant is expected to make his ODI debut, following his exploits in tests.

The 21-year-old Pant, who cracked a ton at the Oval in his debut series against England, continued his rich form with consecutive scores of 92 against the West Indies in the two-match Test series.

This series will also see skipper Virat Kohli making the return to the fold after taking a break during the Asia Cup which India won.

Former captain Mahendra Singh Dhoni will once again be under the pump as he has time and again struggled to replicate his old form.

With Pant now also making the team regularly, Dhoni will be under more pressure to perform.

India have struggled to find a proper No.4 batsman and this will also present an opportunity to Ambati Rayudu, who is expected to bat at the position, to stake a claim in the side more regularly.

Rayudu and will look to carry forward his fine form of Asia Cup where he scored 175 runs, averaging 43.75 from six innings.

India will also have the services of all-rounder Ravindra Jadeja in the lower-order and in the absence of injured Hardik Pandya, he will have to step-up.

Left-arm wrist spinner Kuldeep Yadav and Yuzvendra Chahal will once again be expected to wreak havoc with their spin while fast bowlers Mohammad Shami and an in-form Umesh Yadav will share the workload in the absence of Bhuvneshwar Kumar and Jasprit Bumrah, who have been rested for the first two ODIs.

The tourists are expected to put up a better show in white ball cricket unlike the Tests.

But the withdrawal of big-hitting opener Evin Lewis from the ODI series citing personal reasons is a body for the side which is already missing Chris Gayle and Andre Russell.

To make matters worse, coach Stuart Law, who is into his penultimate assignment with the team, will not be allowed in the dressing room in the first two ODIs due to a breach of ICC's code of conduct.