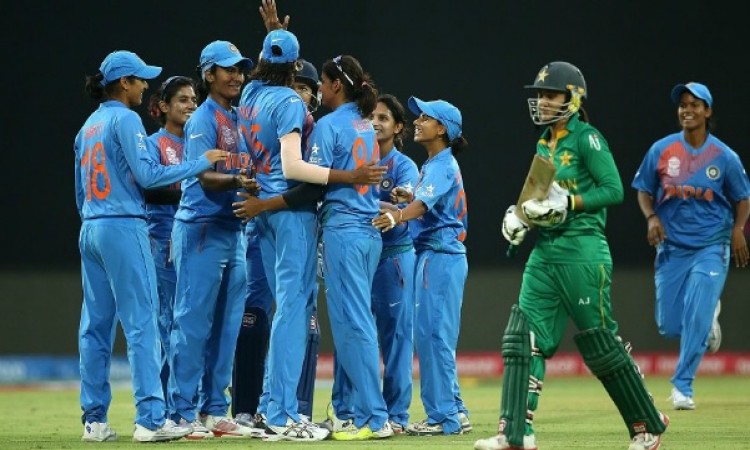 Nov 10 (CRICKETNMORE):  On a high after a resounding 34-run winning start over New Zealand in their ICC Women's World T20 campaign, a confident India will aim to continue their domination over arch-rivals Pakistan when they face off at the Providence Stadium here on Sunday.

India and Pakistan women have played each other 10 times with India winning eight times and Pakistan the other two. India also hold the upper hand in World T20 events, winning three of the five encounters so far.

Going in to Sunday's high-octane clash, India will be hoping for a repeat of their show in the opener against New Zealand.

Skipper Harmanpreet Kaur led from the front with a blistering maiden T20I ton (103 from 51 balls) to help India post a mammoth 194/5, their highest ever T20I total before the bowlers got into the act to restrict the White Ferns to 160/9.

But despite the win, India do have concerns in their batting order, especially at the top of the order after stumper Taniya Bhatia failed to justify her promotion to open the innings along side Smriti Mandhana. While Bhatia fell for nine, Mandhana too got out cheaply after scoring just two runs.

It will be interesting to see if coach Romesh Powar and Harmanpreet decide to back veteran Mithali Raj to open the innings along side Mandhana against Pakistan.

Mithali opened the innings for India in the two warm-up games against England and the West Indies scoring 18 and 0 respectively.

But the women-in-blue will take heart from the efforts of Harmanpreet and rookie Jemimah Rodrigues, who forged together a match-winning 134-run fourth wicket stand to dig India out of a troubled start. Rodrigues, in the process got to a brilliant half century off a mere 40 balls.

The bowling department is also expected to keep up their decent work, specially the spin duo of Dayalan Hemalatha and Poonam Yadav, who shared six wickets between them in the previous match.

On the other hand, Pakistan will be itching to bounce back from the opening 52-run loss in the opener against AUstralia, specially considering their good form in the two wins in the warm up fixtures against South Africa and Bangladesh.

Against Australia's 165/5, Pakistan failed to get going after being initially reduced to 31/3 and later their lack of big hitters cost them dear to be eventually restricted to a meagre 113/8.

It will also be interesting to see how Pakistan's bowlers handle the onslaught from the Indian power-hitters in Harmanpreet and Co.