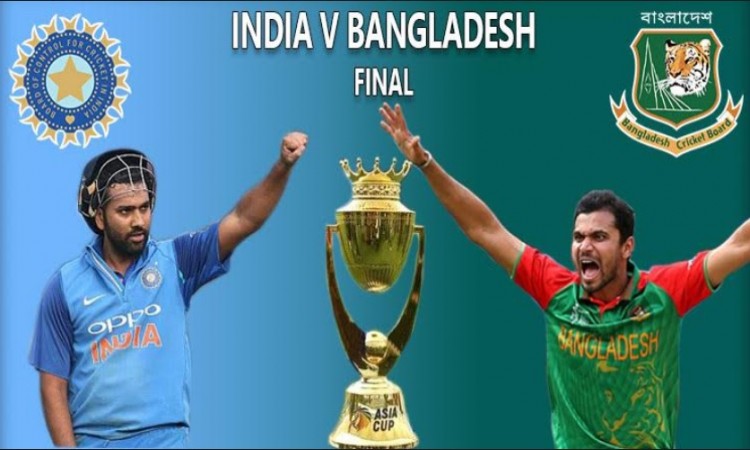 Dubai, Sep 27 (CRICKETNMORE): Defending champions India are the favourites to lift the Asia Cup trophy for the record seventh time when they face a confident Bangladesh in the final at the Dubai International Cricket Stadium here on Friday.

For India, the last-ball draw against Afghanistan in their final Super Four encounter on Tuesday will serve as an eye opener despite all the top guns, including skipper Rohit Sharma and his in-form opening partner Shikhar Dhawan were rested for the inconsequential tie.

Chasing a competitive 253, India under Mahendra Singh Dhoni got off to a flier from the new opening pair of Lokesh Rahul (60) and Ambati Rayudu (57) before a mini collapse, coupled with a few run-outs and umpiring errors, eventually resulted in a tie.

With both Rohit and Shikhar set to return to the playing XI, and Rahul and Rayudu in equally top form, it will be interesting to see if the Indian team management decides to play Rahul in the middle order.

In such a scenario, the axe could be either on Dinesh Karthik or Kedar Jadhav, but the latter's part-time off-spinning ability gives him an upper hand.

Going into the final, India, who made as many as five changes in their tie against Afghanistan, will be boosted by the return of the regulars, especially the new ball pair of Bhuvneshwar Kumar and Jasprit Bumrah, who were dearly missed in the death overs.

India will also hold a psychological advantage over the Mashrafe Mortaza-led team after their seven-wicket win in their first Super Four tie of the ongoing Asia Cup.

Bangladesh, who defeated Pakistan in their do-or-die Super Four clash on Wednesday, will battle against all odds, including injuries to a few key players in their attempt to lift the trophy for the first time. Bangladesh finished runners-up twice -- to Pakistan in 2012 and to India in 2016.

Bangladesh also had been handicapped by injuries to some of their key players. On the opening day, opener Tamim Iqbal was ruled out with a wrist fracture, then the finger injury of experienced al-rounder Shakib Al Hasan has resurfaced again.

But on the positive side, former skipper Mushfiqur Rahim, who is the second highest run-scorer in the tournament so far, belted a brilliant 99 against Pakistan to strengthen Bangladesh's shaky middle order.

The bowling department will be once again spearheaded by the skipper Mortaza and left-armer Mustafizur Rahman. Mustafizur, who has been off-colour for most part of the tournament, came back to form against Pakistan when he scalped four wickets for 43 runs.

In the absence of the spin spearhead in Shakib, off-spinners Mehidy Hasan and Mahmudullah will be Mortaza's go-to bowlers in the middle overs.