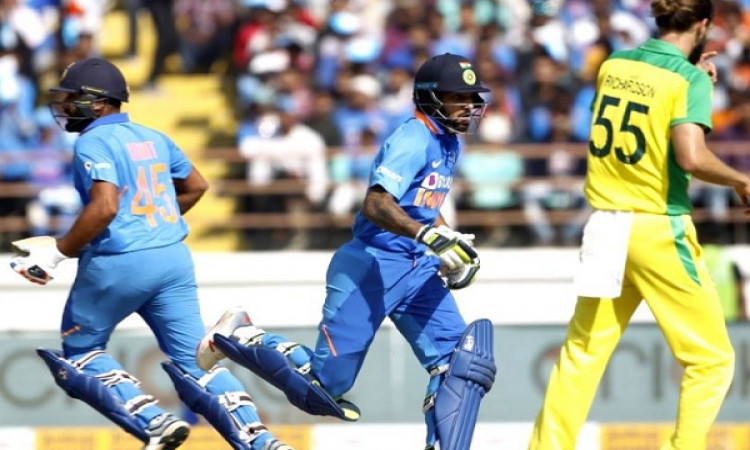 New Delhi, Jan 18. Team India will take a call on injured openers Rohit Sharma and Shikhar Dhawan before the final ODI in Bengaluru on Sunday itself. While Dhawan didn't come out to field due to a blow on his rib cage while batting, Rohit walked off in the 43rd over of the Australia innings after a shoulder injury.

The team management is keeping a close eye on the duo and will take a call on their availability before the series decider at the M. Chinnaswamy Stadium.

The BCCI said: "Shikhar Dhawan and Rohit Sharma are progressing well. Their recovery is being closely monitored and a call on their participation in the final ODI will be taken tomorrow before the match."

Speaking after the game, skipper Virat Kohli gave an update on Rohit's shoulder and said: "I asked Rohit briefly just now. It's that left shoulder which has popped out a few times. There's no tear, so hopefully he should be back for the next game."

As for Dhawan, BCCI had issued a statement on Friday itself after the India innings wherein Dhawan hit a 90-ball 96. "Shikhar Dhawan got hit on the rib-cage on his right side. He will not be taking the field today," BCCI said.

While Dhawan and Kohli both hit fifties, it was K.L. Rahul who stole the show with his blitz at the end of the India innings. Speaking after the game, Rahul said that watching videos of the likes of Steve Smith, AB de Villiers and Kane Williamson helped him.

"Kane Williamson, who I have tried to go back and watch some of his videos to see how they build their innings, and how they play in certain situations.

"Only thing I have tried is how to be better in certain situations. And reading of the game has got a lot better now that I have played in different positions," he added.