Visakhapatnam, Feb 23 (CRICKETNMORE): With their eyes firmly on getting the World Cup combination right, a spirited India will look to continue their dominance over Australia, this time at home, when they play the first Twenty20 International (T20I) game here on Sunday. 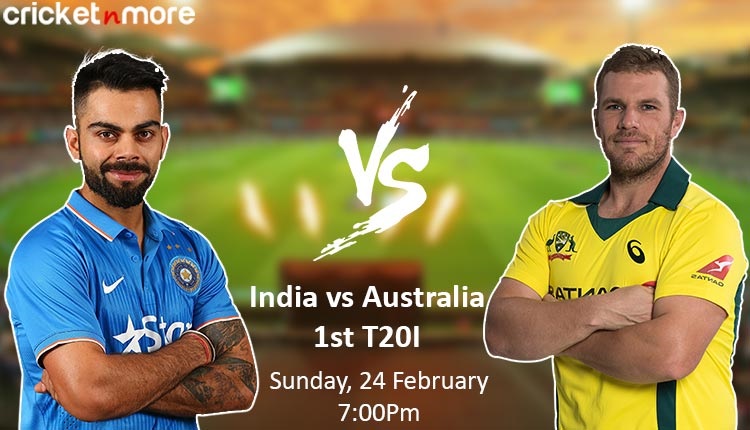 The seven-match tour comprising two T20Is and five ODIs will be India's last international assignment before the ICC World Cup which starts on May 30 in England and Wales.

India won a historic Test and ODI series Down Under last month and Virat Kohli - back after a break to lead the side - and coach Ravi Shastri will look to get a few places sealed before the mega event.

The likes of Rishabh Pant and all-rounder Vijay Shankar are aiming to make the final cut to the World Cup.

While Pant edged out Dinesh Karthik in the ODI side, Shankar proved his mettle in New Zealand with some good displays with the bat.

With Hardik Pandya out injured, it will be a great opportunity for Shankar to strenghthen his case while Pant will also look to make the most of the chances he gets.

For Karthik, who is still in the mix, the two T20s will be his last chance to make a statement.

Dropped from the 50-over team, the veteran stumper batsman drew a lot of flak after he refused a single when Krunal Pandya was on a rampage at the other end in the series deciding T20 game against New Zealand which India lost by four runs.

Coming to India's bowling department, pace spearhead Jasprit Bumrah is back after a break.

Bumrah is two shy of his personal tally of 50 wickets in T20I cricket, an achievement only in possession of the discarded Ravichandran Ashwin.

All eyes will be on rookie leg-break bowler Mayank Markande who could make his debut in international cricket.

But India could go in with the tested pair of Yuzvendra Chahal and Krunal Pandya, who have done reasonably well for the home team in recent times.

Kohli will look to straightway get back among runs after a sterling 2018 where he ended the year with an astounding 2,735 runs from 38 matches across formats.

He averages 61 from 13 T20I innings against Australia with five half-centuries in those games.

The tourists led by Aaron Finch may not have played T20Is since their last series against India three months back, but they are fresh from their extended Big Bash League with six players, including the skipper, featuring in the all-Melbourne final on February 17.

D'Arcy Short, who became the player of the tournament, played 15 BBL games this season for Hobart Hurricanes scoring 637 runs at 53.08 average (140.61 strike rate).

He was followed by competition leading wicket-taker Kane Richardson who topped the bowling aggregate with 24 at 17.70 (economy rate 7.75).