The Australian men's cricket team will wear an indigenous jersey for the upcoming three-match T20I series against India beginning November 27, the design of which was unveiled by Cricket Australia(CA) on Wednesday. 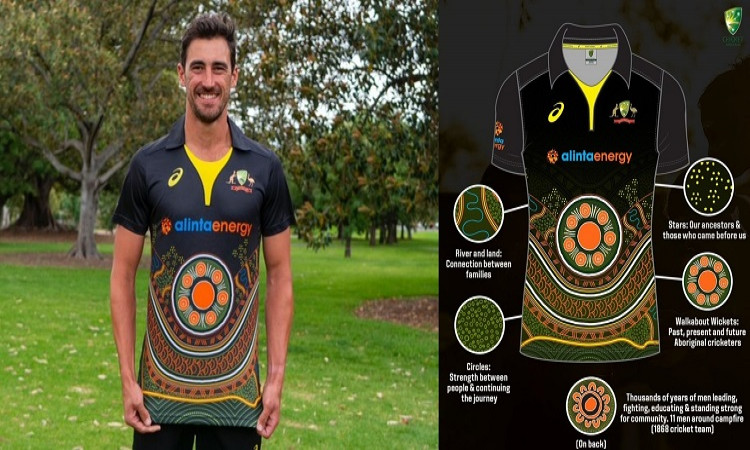 The shirt continues the storytelling of the first-ever Australia team to tour overseas when in 1868, a group of Aboriginal cricketers played 47 matches in the UK having made a three-month journey.

The jersey has been designed by Kirrae Whurrong woman Aunty Fiona Clarke, the great-great-granddaughter of Grongarrong (Mosquito), who was one of the members of the team that played in England in 1868, designed the original Walkabout Wickets artwork that will feature on the front of the playing shirt.

It has been co-designed by Courtney Hagen, Butchulla, and Gubbi Gubbi woman and Cricket Australia's Indigenous Engagement Specialist.

The artwork represents past, present, and future Aboriginal cricketers, with the large circle representing Lord's and the smaller circles signify the team's various meeting places during that tour.

Australia's women's team wore a shirt with similar artwork earlier this year, while the Walkabout Wickets logo has been a feature on Test shirts and Indigenous shirts have featured in the WBBL and BBL, according to a report in ESPNcricinfo.

The two teams will then compete in the Border-Gavaskar Trophy starting with the pink-ball Test in Adelaide from December 17. It will be followed by Tests at the Melbourne Cricket Ground (December 26), the SCG (January 7), and the Gabba (January 15).