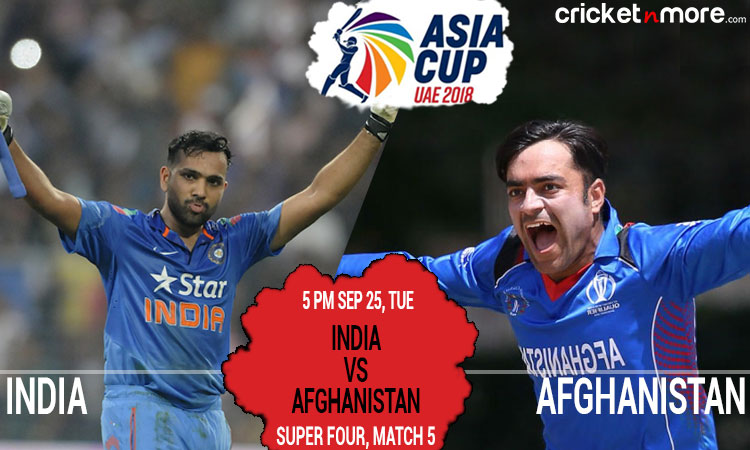 Dubai, Sep 24 (CRICKETNMORE): Having already sealed their place in the final of the Asia Cup with successive wins over Bangladesh and Pakistan, defending champions India will now face a resurgent Afghanistan in the final match of the Super Four stage at the Dubai International Cricket Stadium here on Tuesday.

On Sunday, India made a mockery of Pakistan's below-par target of 237 with the opening duo of skipper Rohit Sharma and Shikhar Dhawan stitching together a 210-run stand to guide the Men-in-Blue to a 9-wicket win en-route the September 28 final.

India had earlier defeated Bangladesh in their first Super 4 match, to remain as the only unbeaten team in the tournament so far.

Going in to Tuesday's tie, India will aiming to continue their dominance over the Asian newbies, who have managed to give a tough fight in their narrow defeats to the likes of Pakistan and Bangladesh in their Super Four clashes.

While Pakistan managed to win a last-over thriller over the Afghans by 3 wickets, Bangladesh on Sunday pipped Afghanistan by 3 runs to set up a virtual semi-final with Pakistan on Wednesday.

Aware of the threat the Afghans could pose, despite being an inconsequential tie for the Men-in-Blue, Rohit Sharma and the team management could opt to rest some of the main players ahead of the final and test the bench.

In such a scenario, Lokesh Rahul and Manish Pandey could get a look-in in the middle order while medium pacers Siddharth Kaul and Deepak Chahar could come in to give Bhuvneshwar Kumar and Jasprit Bumrah much-needed rest before the final.

India is unlikely to tickle with their opening combination, which has been a thorn in the opposition's ranks throughout the tournament while the middle order, comprising Ambati Rayudu, Dinesh Karthik, Kedar Jadhav and Mahendra Singh Dhoni seems to be in decent form.

All-rounder Ravindra Jadeja will lead the spin department that includes the wrist spin duo of Yuzvendra Chahal and Kuldeep Yadav.

On the other hand, having lost both their Super Four matches so far, Afghanistan are already out of contention for the final but their performances have surely won a million hearts.

Afghanistan will be once again banking on their strong batting to put a big total on the board before unleashing their spin trio of Mohammmed Nabi, Mujeeb Ur Rahman and Rashid Khan to have a go at the mighty Indian line-up.

Afghanistan's one major concern will be their lack of experience to handle high pressure situations, that led them to two narrow losses in the Super Four stage.

With nothing to lose, the Afghans will be aiming to end the tournament on a high but it will surely be a hard nut to crack, considering India's current red-hot form.