Nov.10 (CRICKETNMORE) - Australia began their ICC Women’s World T20 campaign with a 52-run win against Pakistan, getting the search for their first world title since 2014 off to the expected start. SCORECARD 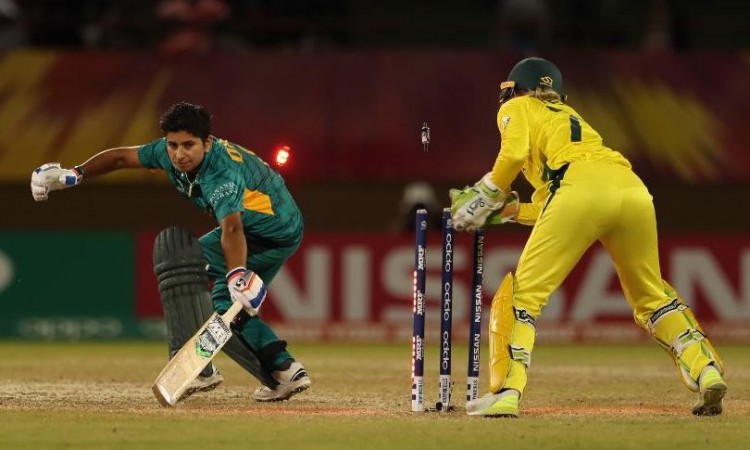 Considered among the favourites for the title, the three-time champions put up 165 for five in their 20 overs, a total that proved out of Pakistan’s reach.

After winning the toss at the Guyana National Stadium, Australia’s openers made merry in the powerplay, smashing 58 runs without any damage. Alyssa Healy made her intentions clear by stepping out and hitting her fourth ball for six; she would add eight fours to that in a quick-fire 48 (29b), the joint top score of the match.

After Healy was dismissed, Meg Lanning was promoted to No. 3 and joined Beth Mooney in a 36-run partnership, off a sedate 37 balls. Seamer Aliya Riaz, who dismissed Healy, helped bring the run rate down, conceding only two boundaries in her four overs, one of those off the last ball of the match. Mooney copied her opening partner’s score, departing for 48(39b, 6x4).

Lanning continued her measured aggression, entertaining with her play against spin, the highlight being in inside out loft for six over cover in the 15th over. She was dismissed for 41(34b, 3x4, 1x6) in the final over, Aliya’s second victim.

In reply, Pakistan lost three wickets for 33 runs in their powerplay, the costliest of those coming from a needless run out: 21-year old Umaima Sohail was looking impressive, batting on 20 off just 11 balls, when she chose not to put in a dive for a tight run and was caught centimeters short of her ground.

From among the rest of the top order, only Bismah Mahroof got into double figures, scoring 26 (25b, 2x4) as wickets fell around her. She was dismissed in the 14th over, part of a late slide that saw Pakistan lose three wickets for six runs.

Sana Mir provided some late resistance, scoring 20 not out (21b, 2x4). But against the discipline and variety of the Australia attack, Pakistan never looked like threatening Australia’s total.  All but one of Australia’s bowlers picked wickets, with Megan Schutt, the top ranked T20I bowler, taking two.

Pakistan now face a red-hot India on Sunday, 11 November in the first game of the day. Immediately after that, Australia will take on Ireland, who will be playing their first match in the tournament.