I just enjoy batting with Rohit and Shikhar: KL Rahul 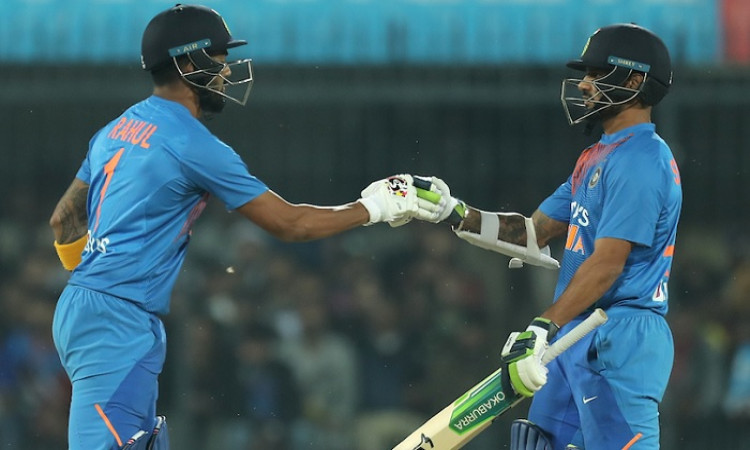 Indore, Jan 8: K.L. Rahul said on Tuesday that he enjoys batting with both Rohit Sharma and Shikhar Dhawan, playing down talks of a shootout between him and Dhawan for an opening spot along with Rohit going into the World T20 in Australia in October this year.

Rahul top-scored with a classy 45 as India breezed past Sri Lanka by seven wickets in the second T20 international to take 1-0 lead after the first game was called off.

Also Read: I am gaining confidence with white and red ball: Navdeep Saini

Since Dhawan got injured, Rahul has scored a lot of runs to stake a strong claim at the top of the order along with Rohit who is rested for this series, paving the way for Dhawan to return. Dhawan scored 32 on Tuesday.

"We all go out there with a simple plan which is to win the game for your country. He (Rohit) makes it look so easy and I've always batted with Shikhar, especially at the start of my Test career, and we understand each other well. I just enjoy batting with both of them," Rahul said after the match.

On his batting, the 27-year old right-hander said: "I've just been getting runs and the reading of the game has gotten a lot better. I know how to build my innings again. I felt that was lacking and I always knew I had the game to get runs and it was just a matter of spending time in the middle. Really happy to carry on the same way," Rahul said.

Indian bowlers fired in unison to restrict Sri Lanka to 142/9 after asking them to bat first. Navdeep Saini starred with the ball with figures of 2/18. The batters then made it look easy with Rahul playing some good looking shots.

"It was a smaller target and my plans were simple -- to spend some time in the middle. Our bowlers bowled really well and anything around 170 on this wicket would have been a par score. A lot of credit must go to the bowlers," he added.