I Enjoy Dhawan's Batting, He Is A Class professional: David Miller

Swashbuckling South African batsman David Miller has revealed his admiration for Shikhar Dhawan, saying the Indian opener is very professional in his outlook and is consistent as well. 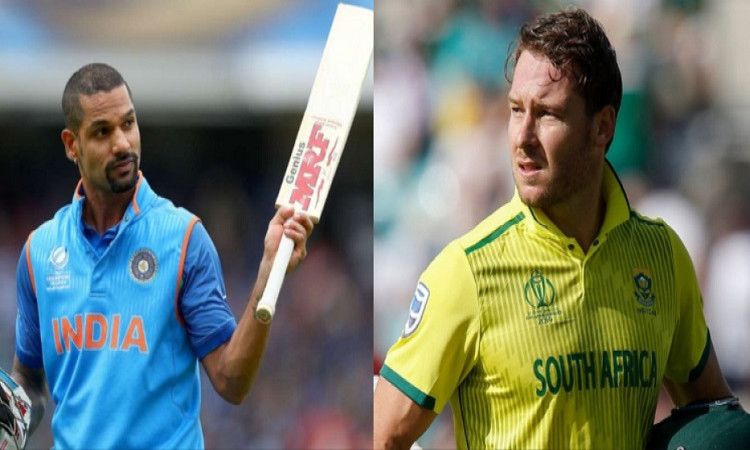 In an exclusive interview, the 31-year-old left-hander shared his views on his new IPL team - Rajasthan Royals, COVID-19 tests and also spoke about the famous six that made a policeman blind in one eye in 2015.

Miller praised Dhawan's aggressive approach to the game. "There are many cricketers that I admire. Growing up my role models were Matthew Hayden and Adam Gilchrist. Both of them were left-handers and always took the aggressive and positive route. Someone I've really enjoyed seeing batting in the IPL has been Shikhar Dhawan," Miller said.

"I just love how he goes about his game. I've got to know him as a person as well. He is extremely relaxed about his outlook on his game and is very professional. But at the same time, he understands that cricket is cricket and sometimes things turn out differently. But, yeah, just the way he goes about his business and is a really consistent performer. So, I really enjoy watching him bat."

Miller, who will feature for Rajasthan Royals in the upcoming Indian Premier League in the UAE starting September 19, revealed he also picked former national team-mate AB de Villiers's brain to understand his mindset towards the game.

"With AB, I've always had lots of discussions and I have always told him that he's very lucky that I'm not a bowler because otherwise, he wouldn't be scoring so many runs. Jokes aside, I've been talking with AB about the mindset he goes in with and stuff like that," he said. "So, I've been really fortunate to have him around to chat with, regarding certain things to have had the relationship that I have with him playing for the Proteas for many years now."

Speaking of his maiden stint with Rajasthan Royals, the explosive batsman hinted that it won't be a trouble for him to adjust in the team's environment as he already knows many of their players.

"I've known some of the guys at the Royals having played with and against some of them. I wouldn't say that I know them too well but, obviously, I've known them as competitors. Tom Curran is someone I know pretty well and have got on really well with him in the past," he said.

"Andrew Tye I played with for the Kings XI Punjab. Oshane Thomas as well...I've played with him in Jamaica. I've also played with Ankit Rajpoot and Manan Vohra for the Kings XI. So, I've actually played with quite a few of the guys but I am really looking forward to meeting with the guys with whom I haven't played much and the whole of the team," he said.

Asked about his struggle, like COVID-19 testing he faced while travelling to Dubai, Miller said he has got used to it now. "I've been tested around six or seven times since the whole thing started. I've been hearing that moving forward we're going to be having a test every four to five days so there' going to be some tests coming down our noses. It's a very uncomfortable feeling but it's obviously important, we need to do it and you do get used to these things with time," he said.

During the 2015 IPL season, a ball that Miller hit for a six in Kolkata hit a policeman's left eye and he lost his eyesight. That incident is still fresh in the South African's mind. "It was quite a big issue, to be honest with you. It was extremely serious and I think I blinded the policeman and it was quite a situation that we had. I still remember the shot and how it went through the air and everything unravelled in a couple of days actually," he said.

"It came out in the press and the newspapers and was quite tough to deal with, to be completely honest with you. Fortunately, that is not going to be happening this year without the crowds," he laughed, referring to the likely empty stands during the IPL in the UAE. "This will be my first time playing in front of no crowds. But back in South Africa, we're used to playing four-day games in front of no crowds; there's maybe just a man and his dog there to watch. T20 and IPL, though, is going to be very different with no crowds, to be honest," he concluded.