Honoured to have gate named after me, says Virender Sehwag

New Delhi, Oct 31 (Cricketnmore) Former India opener Virender Sehwag on Tuesday hoped that Delhi will produce many more stars to have more gates of the Ferozshah Kotla Stadium named after them. 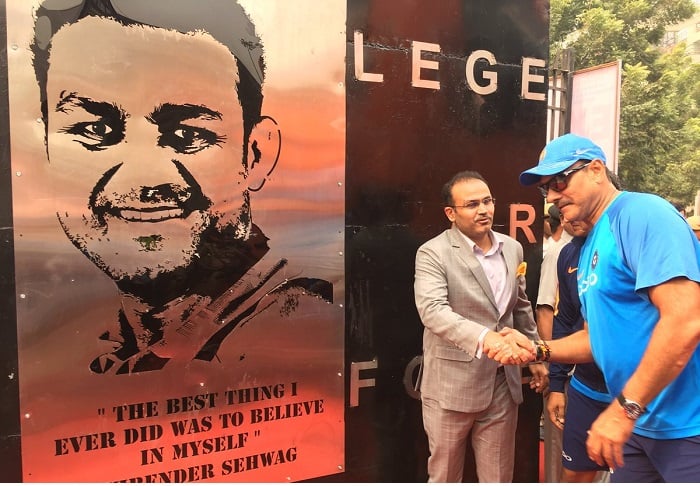 Inaugurating the Virender Sehwag Gate at the Ferozshah Kotla here, the right-hander said it was a huge honour to have a gate named after him at the ground where he started his journey to become a great cricketer.

The Gate No.3 of the stadium was dedicated to the star batsman.

"It's an honour to have a gate named after me at Ferozshah Kotla Stadium. I remember when I started off I used to daily cross this gate and now it has my name," Sehwag told reporters here.

Head Coach @RaviShastriOfc and #TeamIndia members congratulate @virendersehwag after the gate at Feroz Shah Kotla was named after him. pic.twitter.com/bveVvQtUrP

Thanking the Delhi and District Cricket Association (DDCA), the cricketer-turned-commentator said: "There will be many more cricketers from this state who will have stands, gates, pavilions named after them but I am glad that I am the first one. I feel very fortunate and would like to thank the DDCA for this honour."

"Sehwag changed the way the game was played in India. Earlier we used to score 240-250 runs in a day, but after he came 350-360 became possible. He was a major reason why India won so many matches," he said.