Have no clue why Virat Kohli is so animated: Kieron Pollard

Visakhapatnam, Dec 19: West Indies captain Kieron Pollard doesn't have any clue why his Indian counterpart Virat Kohli is "so animated" in the ongoing series. During the T20I series, Kohli's 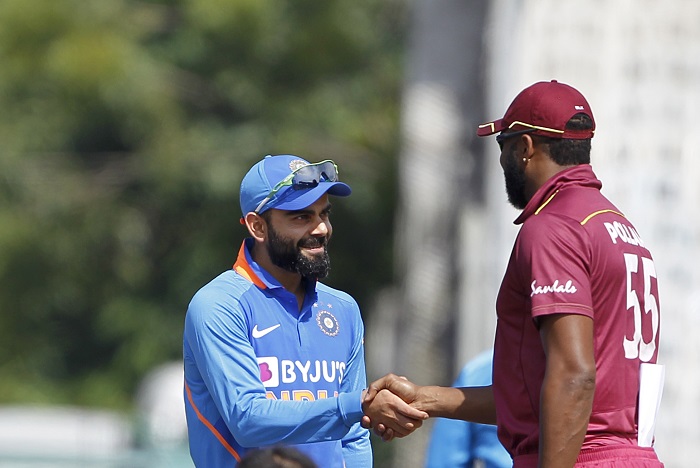 Visakhapatnam, Dec 19: West Indies captain Kieron Pollard doesn't have any clue why his Indian counterpart Virat Kohli is "so animated" in the ongoing series.

During the T20I series, Kohli's imitation of Kesrick Williams' 'notebook tick' celebration was 'television gold', and then he seemed agitated when on-field umpire Shaun George referred Ravindra Jadeja's run-out in the first ODI in Chennai.


IPL 2020 Auction: Uncapped Indians on mind as franchises wish to invest in youth

And in the second ODI, Kohli, who got dismissed for a first-ball duck, was very animated after Pollard's first-ball dismissal.

"You have to ask him why he is so animated. I can't answer that for you. It is what it is. You ask him that question and let him answer that. I don't know. I have no clue," Pollard said at the post-match press conference.

On Wednesday evening, India defeated West Indies by 107 runs to level the three-match series. The hosts, put in to bat, rode on brilliant centuries from Rohit Sharma and K.L. Rahul to post a gigantic 387/5. They then restricted the West Indies to 280 and won the match by 107 runs.

During the chase, the visitors were 192/3 three in the 30th over, but lost five wickets for 18 runs to eventually concede defeat.

"We were in a good position and if you lose wickets frequently, you put yourself on the backfoot. That's where we faltered in the chase and we accept that," Pollard said.

"Chasing 388, guys had to go out and express themselves, rather than trying to get in. I thought, where the game changed was in last 10 overs (of Indian innings), we went for 127 runs, that's where we lost the momentum in the entire game.

"Before that, it was neck and neck and we knew it was a good track. We haven't really executed (our plans) in the back-end which has been really the storyline for us when there has been a flat track," he added.