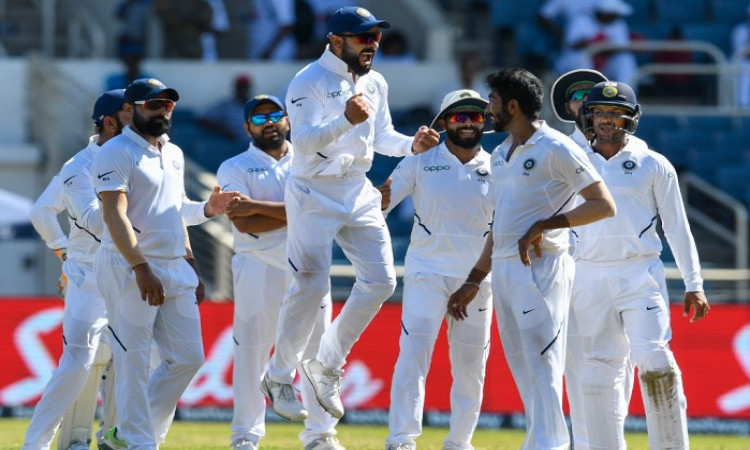 Kingston (Jamaica), Sep 1: Jasprit Bumrah, Hanuma Vihari and Ishant Sharma lit up Day 2 of the second Test between India and West Indies as the visitors took control in Kingston. Vihari scored his maiden Test century while Ishant scored his own maiden half century as India scored 416 batting first. Jasprit Bumrah then led the way with a six-wicket haul, which included a hat-trick as India reduced West Indies to 87/7.

India on Saturday started Day 2 on 264/5 with Vihari and Rishabh Pant in the middle. Pant was resilient in his 64-ball 27 on Day 1 but fell off the very first ball of the second day against Jason Holder. Ravindra Jadeja then joined Vihari and helped in pushing India's score past the 300-run mark before falling to Rahkeem Cornwall.

India, however, found their biggest partnership of the innings after that when Ishant Sharma dug in with Vihari. The pair added 112 for the eighth wicket with Ishant doing most of the scoring. Vihari eventually scored his maiden Test ton and Ishant scored a half century.

After crossing 50, Ishant abandoned his defensive game and started going after the bowlers. He tried one shot too many and ended up holing out at deep midwicket to Kraigg Brathwaite. India had made 414 runs by then and the last two wickets added only two more. Vihari was the last man to fall having made 111.

The fireworks though continued for India as Jasprit Bumrah picked up from where he left off in North Sound.

Bumrah first dismissed opener John Campbell in the seventh over before getting Darren Bravo, Shamarh Brooks and Roston Chase off consecutive balls in the ninth -- and with that he became the third Indian bowler to get a Test hat-trick after Harbhajan Singh and Irfan Pathan.

Shimron Hetmyer was the only man to fall to someone apart from Bumrah. He lost his middle stump to Mohammed Shami, thus breaking a feeble 45 run stand between him and captain Jason Holder which was the only one that went into double figures for the West Indies. Holder soon became the sixth man to fall to Bumrah on the day.