Harbhajan Reveals How He Used To Plot Ponting's Dismissal

Ricky Ponting's hard hands against spin bowling and the psychological edge he had yanked from the batsman very early in the 2001 series helped former India spinner Harbhajan Singh plot out the ex-Australian skipper frequently. 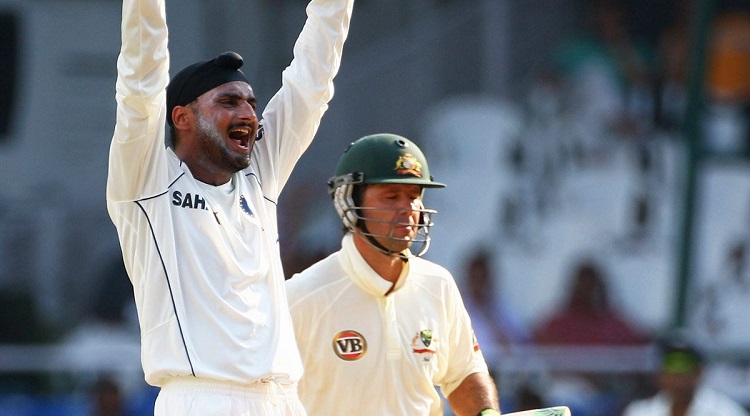 Harbhajan, who played 103 Test matches and took 417 wickets in his career, dismissed Test cricket's second-highest run-getter 10 times - five times each in the 2001 home series and the 2007-08 series Down Under.

Harbhajan, however, has enormous respect for Pointing not just as a batsman but as a guide and coach to youngsters when the two shared the same dressing room at Mumbai Indians in the Indian Premier League.

Harbhajan said that he found some technical frailty in Ponting, who was known to smash fast bowlers all around the park.

"I could see that while coming forward in his defense, he jabs (at the ball) and doesn't play with soft hands. I felt that in his defense, he comes with hard hands. The ball that bounces or rises would hit the top of his bat and that always gave me a chance for bat-pad or get him out caught at short-leg or backward short-leg. And once I sensed that he wasn't really comfortable in defending the ball, I could play on the weakness," said the 40-year-old.

Harbhajan said that solid defense is needed to become a complete and proper batsman. 'Bhajji' got the Australian in various ways. Apart from getting him out with close-in fielders, he also got him out leg-before and caught at slips. Ponting could score just over 200 Test runs against the India off-spinner.

"You may have every shot, but if you have solid defense you become a very proper, complete batsman. When he used to play fast bowling, it never seemed like he had hard hands but against a spinner, you have to play with slightly more soft hands. I felt he would rush, and the ball would hit his gloves. I got him out four-five times (five times) in that series against us in 2001," Harbhajan explained.

"After that, every time I played against him, it was more of a mental game. When you get out to a bowler a few times then it is always at the back of your mind. Even if you are batting at 130, you always think, oh this bowler has come, hope he doesn't get me out. That was probably something he had on his mind. Maybe that was an advantage for me. I had in my mind that I can get him out. I felt like conditions don't matter, surface doesn't matter. I can get him out, so it worked for me."

Harbhajan, however, says his success doesn't lessen the fact that Ponting was not just a batting great but also a great mentor. The two were together at MI. Ponting coached the franchise between 2014 to 2016.

"He was the best player I have played against. I have got great regards for him as a player. When we played against each other, we always had that tussle but when we were together with MI, he was phenomenal in guiding us to our maiden IPL title."

The two never discussed the rivalry or dismissals in the MI camp.

"We never sat and discussed the rivalry or dismissals as such. We never spoke to each other when we played against each other. But when we were at the Mumbai Indians, we never spoke about how I dismissed him or how he couldn't play me. He was there to help me."

The right-arm off-break bowler said that the good thing about Ponting was that he knew what to do to get the best out of experienced players.

"He was phenomenal with MI as coach. We really enjoyed playing under him as coach. He was someone who could guide a lot of players. Was very good with youngsters, and would give a lot of space to us as seniors. He would say you know what you have to do. However, at the same time, he would give us responsibility to do the needful and set example for teammates to follow."

Cricket Has Only Itself To Blame For The Bloated, Unworkable…

Chennai Seals A Last Ball Thriller Against Kolkata To Move…