Happy with new away kit, blue to remain our colour: Kohli 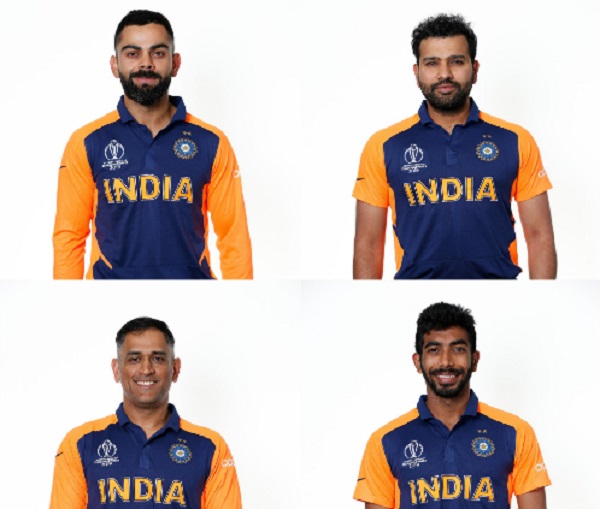 June 29 (CRICKETNMORE) India skipper Virat Kohli on Saturday said he is fine with the new 'away jersey' for one game as it looks smart but maintained that blue will always remain their original colour.

"For one game, it's fine. I don't think permanently we'd be heading in that direction because blue has always been our colour, very proud to wear that. For a change and looking at the occasion, it's (away jersey) a very smart kit," Kohli told reporters on the eve of their crunch tie against hosts and pre-tournament favourites England.

The Men in Blue will be sporting a new 'away jersey' -- which has splattering of orange on the shoulders and the back -- in their Sunday encounter against the hosts.

After the Board of Control for Cricket in India (BCCI) unveiled the jersey on Friday, several members of the cricket team took to social media and shared their look in the new kit.

"I like it, I think it's right up there. For me it would be eight. Honestly, I'm not saying it for the sake of it. I really like it. The contrast is very nice," Kohli said.

Leg-spinner Yuzvendra Chahal took to Twitter and posted his look in the away jersey along with the caption: "Ready to rumble in new jersey".

Pacer Mohammad Shami also tweeted that he is ready for the next match. Shami shared the backside of the jersey while standing next to opener K.L. Rahul with the caption: "Readdy to next match in New Jersey (sic)."

The official account of the Indian team shared the pictures of M.S. Dhoni, Bhuvneshwar Kumar, Kedar Jadhav and Dinesh Karthik on Instagram stories. Skipper Virat Kohli and Rishabh Pant also shared pictures of them wearing their new jerseys on the image-sharing website.

The International Cricket Council (ICC) also tweeted a 54-second video showing the Indian players in their new jersey which they would be sporting against Eoin Morgan's men.

India, with 11 points from six games, are currently placed second in the table, and need to win just one game of their remaining three matches to qualify for the semifinals.

England, on the other hand, need to win both their remaining games to advance to the knockout stage.