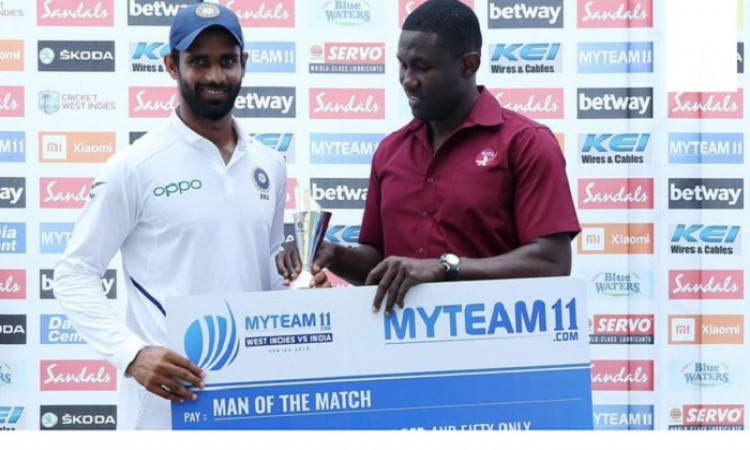 New Delhi, Sep 3: There is something common with all the batsmen who have over the years come from the land of the Nizams - magical wristwork. Be it M.L. Jaisimha, Mohammad Azharuddin or V.V.S. Laxman, they all knew how to nonchalantly hit the same ball through the covers as well as through mid-wicket. And now, Team India has found a new artist from the same place in Hanuma Vihari. And in his short career, Vihari -- just like the predecessors -- has shown what supple wrists can do to disturb the line and length of a bowler.

While in 1960s, it was Jaisimha who attracted the eyes of many and made fans all over the world with his famous wristwork, Azharuddin just took it forward and made sure that the skill set associated with the batsmen coming from the southern part of the country remained a unique feature of the national team from 1984 onwards.

And once Azharuddin bid adieu to Test cricket in 2000, there came a void within the Indian team, a void of artistic glance and flicks towards the leg side which had once taken the opposition bowlers by surprise. But not for long as Laxman cemented his place in the line-up.

Laxman, who was also known as Australia's chief tormentor, used to flick balls bowled well outside the off-stump towards the leg side and even legendary leg-spinners like Shane Warne used to be in awe of his ability to caress the ball down the mid-wicket and long-on region against the turn.

But, once this genius brought an end to his cricketing career, a deep void once again filled the Indian middle-order. However, the 25-year-old Vihari seems to have those unique, extraordinary traits in his batting style. The batsman has shown that wristy shots come naturally to him.

Born in Kakinada in Andhra Pradesh, Vihari lost an opportunity to score his first Test ton against the West Indies in Antigua. However, he made up for it by scoring his maiden Test century in the first innings in the second Test in Jamaica and followed it up with an unbeaten 53, thus announcing his arrival on the international stage.

The best part about his batting is that he is comfortable spending long hours in the middle without batting an eyelid. Also, he waits for the bowlers to drift onto his pads and is more than happy to leave balls outside his off-stump. And once the bowler makes the mistake, he is then in complete command.

In the six Tests which he has played so far (one in England, three in Australia, two in West Indies), Vihari has shown the temperament and the courage to stand the test of time with his calm approach in the middle. Just like Laxman, Vihari has batted in difficult circumstances and has got his runs on pitches which weren't at all easy for batsmen to score runs.

In fact, Vihari made Kohli -- who is being rated as the greatest batsman in modern days - a fan of his temperament. "I think his temperament and technique were top-notch and he countered everything the opposition threw at him," Kohli said while praising Vihari.

"He looks confident and the dressing room feels really calm watching him bat. I think that's a quality he possesses naturally because his game is so correct."

Just like Laxman, Vihari "plays with a lot of heart and is always up to do anything for the team".