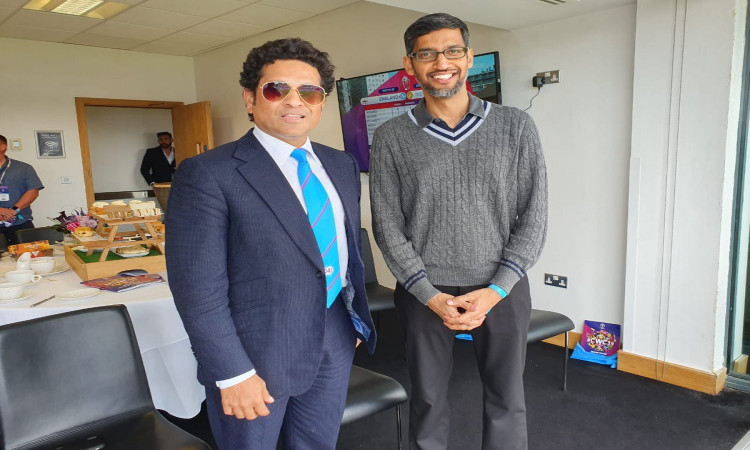 Birmingham, June 30 (CRICKETNMORE): Among those in attendance at Edgbaston on Sunday for the big World Cup match between India and England was Google CEO Sundar Pichai.

The BCCI posted an image of Pichai posing with batting great Sachin Tendulkar on its social media pages.

An avid cricket fan, Pichai had earlier said at an event organised by US-India Business Council that he is backing India and England to reach the final of the World Cup. He has also admitted of dreaming of being a cricketer during his growing up years and idolised Sunil Gavaskar and later Tendulkar.

England won the toss and chose to bat first in Edgbaston. Jason Roy was reunited with Jonny Bairstow at the top of the order after a brief period in the sidelines due to injury and they took England off to a flier of a start. The openers put up 160 runs in 22 overs before Roy fell to Kuldeep Yadav thanks to a sharp catch from Ravindra Jadeja.

That wicket slowed England down but they picked up the pace towards the end with Ben Stokes and Jos Buttler going big guns. They ended up posting a target of 338 for India to chase.

Google CEO @sundarpichai along with the Master Blaster @sachin_rt at the game today pic.twitter.com/jKZKFgelUF