Good To Have Pollard, Pandya In Form: Rohit Sharma

Mumbai Indians (MI) were pushed beyond the 190-run mark against Kings XI Punjab (KXIP) on Thursday at the Sheikh Zayed Stadium thanks to a late blitz from Kieron Pollard and Hardik Pandya. The pair smashed 44 runs in the last two overs and put up 67 runs in just 23 balls for the fifth wicket to take MI from being 147/4 at the start of the 19th over to 191/4 at the end of the 20th. 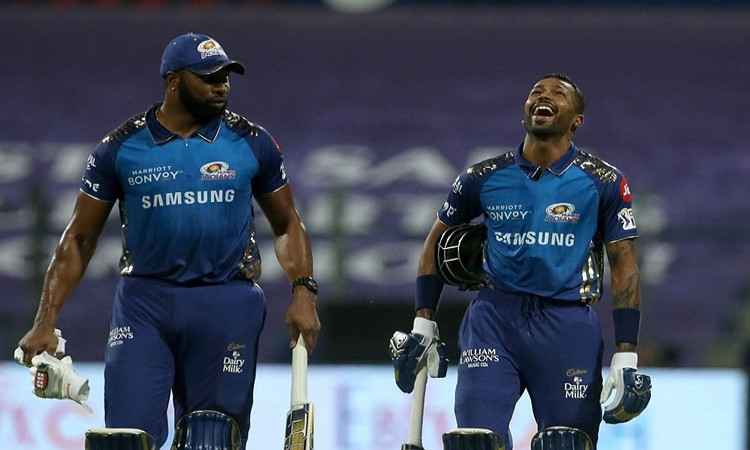 It helped MI cruise to a 48-run win over KXIP.

Also Read: Will Discuss With Coaches If We Want To Play An Extra Bowler: KL Rahul

"We didn't start really well, but we always knew with the kind of attack Punjab had we wanted to capitalize. Those two guys they back themselves to get the runs, it's nice to have them in form as well," said MI captain Rohit Sharma in the post-match presentation ceremony.

MI was also buoyed by a clinical performance from their bowlers with every player who bowled taking a wicket on Thursday for the four-time IPL champions. "It wasn't going to be easy with the ball against KXIP's batting line-up. We knew we had to get early wickets and everything went to plan, credit to the bowlers," he said. Rohit also said that he and fast bowlers James Pattinson and Trent Boult understand each other better.

"They have now got an idea of what I need from them and I have got to know them better too," he said.

Pollard, who was declared player of the match, said it was good to see Pandya among the runs. Pandya is coming back to the sport after an absence of nearly a year due to a back injury.

"It's about what's there in front of you. Look at the bowlers and see how many you want to get, 15 off the over, and then you try to go hard. Today, Hardik had to come and swing and he showed his prowess. We know sky is the limit in the last 4 overs," he said.