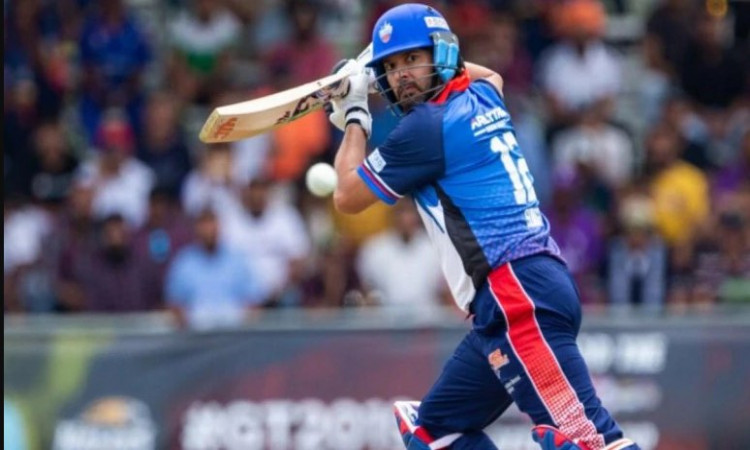 Toronto, July 28 - India's 2011 World Cup hero Yuvraj Singh, who recently called it a day from international cricket, showed he still has fire in his belly with a belligerent 21-ball 35 as his team Toronto Nationals registered a thrilling win against Edmonton Royals in their second match of Global T20 Canada on Saturday.

Yuvraj failed to shine in the first game on Thursday as he laboured to 14 from 27 balls while struggling with back pain.

He was dismissed in bizarre fashion in their defeat to Vancouver Knights.

However, Yuvraj, who is one of the greatest match winners in white cricket, smashed three sixes during his stay at the crease and hit as many boundaries to help the Nationals complete a 192-run chase in the T20 game at the CAA Center.

Yuvraj took Pakistan leg-spinner Shadab Khan to the cleaners much to the delight of the fans as they backed him vociferously. He could not see the team through as a slower ball from Ben Cutting got him out in the 10th over with Toronto still needing more than 100 runs to win.

Fast bowler Manpreet Gony then struck a whirlwind 33 off 12 deliveries to take the team home.

Lower order batsmen Mark Montfort and Salman Nazar contributed too as the pair remained unbeaten as Toronto Nationals won with 13 balls to spare.

"Yeah, it was a great performance. I thought we lost the game... but Manpreet Gony's hitting in the end and smart batting from Monfort and Salman Nazar... these guys pulled it off in the end," Yuvraj said after the game.

"I am loving it. They gave me some flak for my slow batting last game. I am sure Toronto will be happy when they sleep tonight that I hit a few sixes and we won the game," he added.