Given heads up to be India's No. 4, reveals Shreyas Iyer 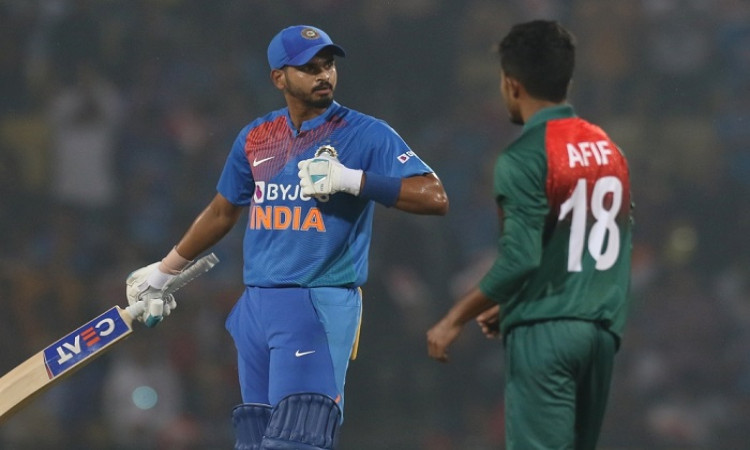 Nagpur, Nov 11: Young batsman Shreyas Iyer has revealed that he has been given a heads up by the team management that he will bat at the much-debated No. 4 spot for India in the limited-overs format.

Shreyas has been enjoying a good run in the recent times in white-ball cricket. In the two ODIs in the West Indies he got the chance to bat at No. 5, Iyer returned with knocks of 71 and 69 respectively and played a crucial part in India's victory in the Caribbean Islands.

Even in the just-concluded three-match T20I series against Bangladesh which India won 2-1, he played knocks of 22, 24* and 62 respectively and was one of the chief contributors for the hosts with the bat.

"For me personally, they (team management) have given me a heads up that 'You'll be there at No.4'. So just back yourself and believe in yourself'," Iyer, who smashed 62 off 33 balls including five sixes in Nagpur on Sunday, said at the post-match presser.

"It has been a really important last few series for me to set the benchmark at the No. 4 position, which all of us are competing for at the moment," he added.

Since last two years, the Men in Blue have tried many players at the number four spot in the lead up to the 50-over World Cup. However, none of them could cement their place in the team.

Iyer believes he can be one of the finishers whenever Virat Kohli and Rohit Sharma fail to perform at the top of the order.

"Even if Kohli and Rohit get out, we need someone to finish the game and bat till the end. That is a No. 4's role. That's what I was trying to replicate today and it worked out really well for me," said the 24-year-old.

Iyer, while admitting there's a stiff competition in the team, said he always tries to compete with himself and looks on improving his game. "Yes, obviously there is lot of competition going in the team. I personally feel that I compete with myself. I don't want myself to be judged with anyone or when you say that this position is empty in the team."

Iyer, who has played nine ODIs and 11 T20Is till now, is however, flexible and ready to bat at any position the team wants him to bat.

"I am really open-minded and can bat at any number. So I just like to back myself in tough situations and today's innings showed that I can bat under pressure as well," he said.

"The support staff have given me the freedom, not just me but all the batsmen, that you need to have that intent when you go in there. And you should feel very positive when you're batting. If the ball pitches in my area, I am not going to control myself. I'll bat according to my instincts," he added.