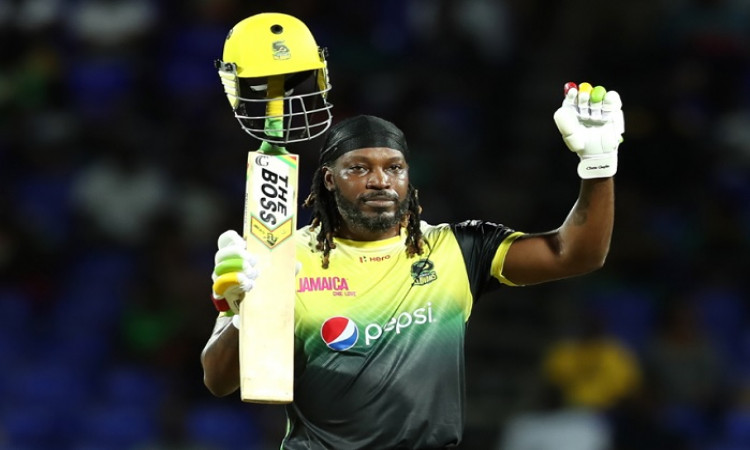 Basseterre (St Kitts and Nevis), Sep 11: Chris Gayle's 22nd T20 hundred went in vain as St Kitts and Nevis Patriots beat Jamaica Tallawahs in a high-scoring Carribean Premier League game. Gayle's hundred helped Jamaica set a massive target of 242 but St Kitts managed to chase it down with an over and a ball to spare.

This is the the second highest succesfull chase in the history of T20 cricket, with the highest being Australia's 245/5 against New Zealand in Auckland last year. It is the fourth highest second innings total in the shortest format of the game. The match equalled the record for the most number of sixes in T20 games with 37 maximums being hit by players from both sides.

Also Read: Look back at the progress team made with happiness: Sanjay Bangar

Gayle smashed 116 from just 67 balls in an innings that included seven fours and 10 sixes. He shared a 162-run stand with Chadwick Walton, who scored 76 off just 36 balls.

However, hosts St. Kitts came out all guns blazing in the second innings. Openers Evin Lewis and Devon Thomas took them past the 80-run mark in the first five overs. Lewis scored 53 off just 18 balls in an innings that included six sixes and three fours.

After the fall of the openers, Laurie Evans and Fabian Allen continued the assault. The pair put up 76 runs between them in just 40 balls. Allen kept his calm despite St Kitts losing three wickets within two overs between the 10th and 15th overs. He then found an able partner in Shamarh Brooks, and by the time the latter was dismised in the penultimate over by Andre Russell, St. Kitts needed just 15 to win off 11 balls.

Campbell ticked off the deficit in that over itself with a six and two fours off the last two balls.