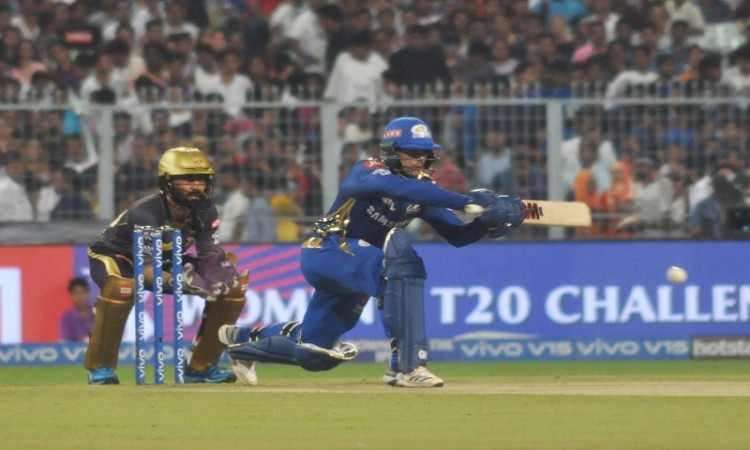 Playing for Mumbai Indians, stumper-batsman de Kock saw his side lose to Kolkata Knight Riders by 34 runs at Eden Gardens on Sunday night, a match where 430 runs were scored in 40 overs.

Also Read: Had one of my best knocks this IPL: Shubman Gill

KKR rode Andre Russell's explosive 40-ball 80 not out along with a 45-ball 76 from teenager Shubman Gill and 54 off 29 balls from Chris Lynn to post 232/2, this season's highest total after being put in to bat.

In reply, Mumbai put up 198/7 largely due to Hardik Pandya's breathtaking 34-ball 91. The bowlers of both the teams were taken to the cleaners with star acts Jasprit Bumrah and Lasith Malinga of Mumbai also not spared, as the pair went wicketless for 92 runs in eight overs.

"IPL is only played in India. So, I mean, bowlers are always under pressure. In India, wickets are always good for batting and there are generally very small fields. The ball does travel. So obviously, it will be a little bit more batting friendly," de Kock told reporters at the post match press conference.

The same, de Kock said, cannot be said about other popular T20s leagues across the globe.

"You go to other places around the world like Australia, there are bigger fields in South Africa, there is a bit in the wicket. Not every wicket is the same. So I think just here generally in India, it is more batting friendly anyway," the 26-year old World Cup bound wicketkeeper opined.

Three-time champions Mumbai Indians need to win at least one of their remaining two matches in order to secure a playoff berth.

One of them is against KKR in Mumbai. De Kock, who failed to open his account on Sunday here, hoped Andre Russell won't do an encore in the return leg on May 5.

"I didn't (enjoy his innings from behind the wicket) actually. I hated every minute of it. No, I'm joking. It was a great innings he played. You can't fault him. He took his time, first couple of balls and then did what he does. So, you can just appreciate. Not just this game but in the ongoing IPL edition. (I hope) he doesn't do it again against us," he said.

Mumbai were reduced to 58/4 before Pandya put on a show and kept his side in the hunt. But due to lack of support from the other end, the team ended losing.

"We would have loved couple of less wickets when Keiron and Hardik walked in. But we tried to get off to a good start so that we don't have to play too much catch up in the end. In this sort of total, if you leave it too late then you'll be out again anyway.

"So, we could have gone anywhere, we could have easily have gone off to a great start. But unfortunately it didn't happen today, so obviously there was a collapse and no one batting with Hardik made it harder for us."

On him getting out, de Kock said: "When you gotta score 233, I think I need to play one or two shots. I think that's just the case of the way we had to go about it. Unfortunately, I got out so didn't look so good but that's how it is."