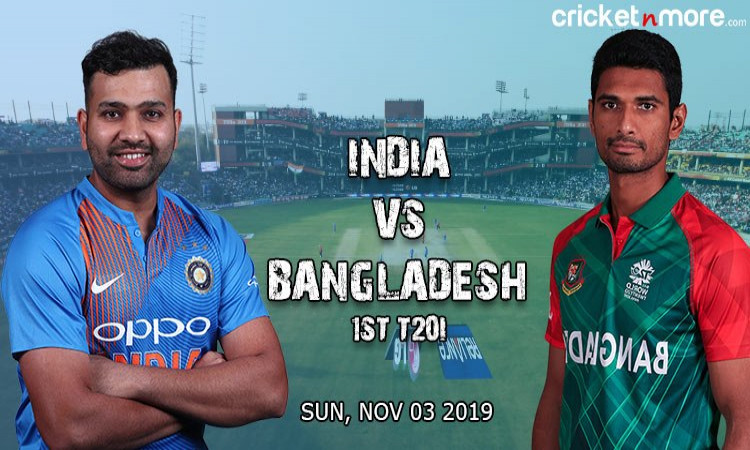 New Delhi, Nov 2: If pre-match press conferences were anything to go by, the first T20I of the three-match series between India and Bangladesh will be focused around two things -- the absence of Shakib al Hasan and the weather conditions which will be there when the two teams meet at the Arun Jaitley Stadium on Sunday.

The air quality has deteriorated to severe levels in the past one week and has cast doubts over the match. There has been smog all over the stadium, forcing many in the Bangladesh camp to wear masks while conducting their practice sessions.

However, as Russell Domingo and Vikram Rathour maintained, there's nothing that the both the teams can do about and all they can eventually focus upon is playing the game.

For the visitors, it would be about coming over the loss of Shakib and Tamim Iqbal and pose a challenge to the Indian side, which has been quite a dominant force across formats in the past two-three years.

As stand-in skipper Mahmadullah stated on Saturday, one thing that his boys will have to make sure is to come out with a consistent batting performance and give their bowlers a chance to rattle the Indian batting line-up.

Their bowling unit boasts of having the likes of Mustafizur Rahim, who has troubled a lot of Indian batters in the past. Thus, if Bangladesh batsmen manage to score decently, they can in be a chance of breaking the shackles and giving the Rohit Sharma-led team a run for their money.

India, on the other hand, will want to make sure they come out with an improved performance from their last series against South Africa, which ended in a 1-1 stalemate.

In the absence of Virat Kohli, the batting will depend mainly on the experience duo of Rohit and Shikhar Dhawan to not only give the team a solid start but also make sure they carry on through the innings, as the team lacks experience in the middle-order.

The Indian batting coach said on Friday that the series will provide the team with an opportunity to try out different combinations. But, one thing which this team will like to focus the most will be to improve their batting while setting up a total - something which even Kohli wants his boys to work upon.

"This Bangladesh team is very good. They have put us under a lot of pressure in the past. So we are not treating them any differently and will look to focus on our game,"

Rohit said while assuring zero complacency from the hosts.

The bowling, although looks a bit inexperienced, but it has the variety to threaten any batting attack, let alone Bangladesh who have many fresh faces in their squad. The likes of Khaleel Ahmed, Deepak Chahar and Yuzvendra Chahal will be leading the Indian bowling.

In batting, opportunity can be given to Shivam Dube and Sanju Samson, who have made to the Indian squad on the back of a consistent performance in the domestic circuit.

Another important factor which is always talked about whenever a match is played in the national capital is the pitch. The Kotla pitch has historically been on the slower side. However, the one for Sunday's match seems to have a lot of grass cover and something on which lots of runs can be expected.