Feel should have you in team, hope Dhoni starts playing: Rohit to Raina

New Delhi, May 12:  India's limited-overs vice-captain Rohit Sharma said that he would like to see Suresh Raina back in the Indian team and hopes that former captain M.S. Dhoni plays competitive cricket again if the latter is playing well. 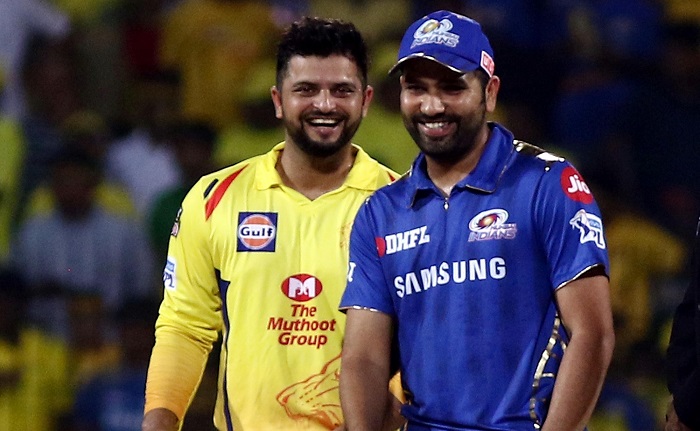 In a live video chat on Instagram with Raina, Rohit said that there has always been conversations within the squad that Raina deserves a place considering the latter's overall skills and experience. The 33-year-old has played 226 ODIs and 78 T20Is for India alongwith 18 Tests and his last international appearance came in an ODI against England in Leeds in July 2018.


I thought my career was over after 2014 T20 WC final: Yuvraj Singh

"I know it is very tough to be out of the team after playing for so many years," said Rohit. "We used to talk that we should have Raina in the team in some way. You have the experience and ability with bowling and fielding.

"I feel that we have seen you play for such a long time, somewhere I feel that somehow or the other you should be back in the team. But then we will see, we make do with what we have in our hands."

Raina said that he remains hopeful of making a comeback.

"I had an injury and a surgery which was a big reason why I lost my place. I still have a lot of cricket left in me. Selection is not in our hands, performances are. I have always enjoyed my cricket and the big players always backed us when we were young. So that is what we need, someone to support us and show the way."

The pair also spoke about Dhoni, who has not played a competitive cricket match since India's 2019 World Cup semi-final exit against New Zealand. He was set to make his return to the cricket field in the Indian Premier League this season but the tournament has been postponed due to the coronavirus pandemic. With that, Dhoni's chances of making it to the Indian squad for the 2020 T20 World Cup and his future in international cricket has come under doubt.

Raina said that Dhoni was batting and keeping wickets well during the practice sessions that Chennai Super Kings held before the pandemic outbreak brought a halt to all cricket activities.

"If that is the case, he should play," said Rohit. "I hope he starts playing again."

"Yes but only he knows, whenever he becomes available people should ask him what his plans are," said Raina.