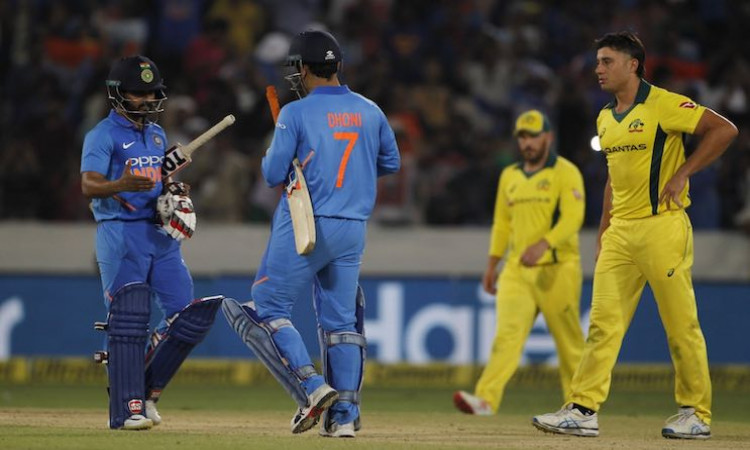 New Delhi, March 14 - The riddle over India's no.4 batsman needs an immediate fix. Skipper Virat Kohli claimed on Wednesday that the team was pretty sure about the playing XI except for one spot, and while he didn't divulge the spot he was speaking about, it is no secret that almost all the batsmen tried at the fourth spot have failed.

In fact, coach Ravi Shastri even hinted that Kohli himself could be pushed to the fourth slot, a move that hasn't seen too many takers.

Among those tried, Ambati Rayudu remains the one with the best results. Even though it isn't anything to write home about, he has batted at no.4 in 14 innings and has hit a century and two fifties. Interestingly, however, the Indian team management in the last two ODIs against Australia dropped Rayudu.

While skipper Kohli came in at four in the fourth ODI in Mohali, Rishabh Pant was promoted to no.4 in the last game at Kotla. Both times, the outcome was far from satisfactory.

Even as the last game before the 2019 World Cup is over, the riddle remains unsolved with the team management having a choice between Rayudu, KL Rahul, Shreyas Iyer or Kohli for the fourth spot.

Speaking to IANS, former Australia opener Mathew Hayden said that for him, Rayudu was the man for the slot, and he was surprised that the Indians decided to even think of trying someone else at that position after his innings of 90 in New Zealand in tough conditions.

"Rayudu is my man. I can't believe India is even questioning that. For so long, he has been so good. I don't know why they are questioning, maybe because you need to speak about something before the World Cup. I don't see Rahul taking that slot as much as I admire him. His time will come and if anything he is more of a stand-by opener for me as opposed to the number four slot," he explained.

Commentator and analyst Harsha Bhogle too refused to believe that Kohli could be a makeshift option for the fourth slot as the team would need its best batsman up and running at the number three spot. He also believes that it is a cause for concern that the position is yet to be sealed with the last game before the World Cup done with at the Kotla on Wednesday.

"It is a bit unsettling that we just played the last game before the World Cup and we are still not sure who our number four batsman is. I think for the longest time the thought was that Ambati Rayudu had cemented his place at that slot before the recent low run. Yes, KL Rahul is an option but he hasn't scored too many there and then Rayudu could say what did I do wrong?

"Kohli at no.4 isn't the best idea. You don't move Messi around because you have to accomodate someone else. Also, if I was the best batsman, I would want to take on the tough challenges that await, than hold back. And Kohli brings in a sense of calm at the crease and that is very important when you are playing games as big as those in the World Cup," he told IANS.

While former India batsman Sanjay Manjrekar refused to speak on the issue, he made his displeasure known at the turn of events through a tweet:

"Whoever gets picked in the end, India's middle order will be its Achilles heel in the World Cup 2019. Really disappointing with Pant and Shankar today (Wednesday)...what a great chance to show their ability. Shankar may have the big shots but he is no Pant, must learn to keep the strike rate up by hitting more along the ground just like his captain does," he wrote.

Speaking after the game, Kohli assured the media that the team management was sure of India's playing XI, except one spot.

"As a side, combination wise, we are pretty sorted. Maximum one change, you'll get to see in the World Cup. As a side, we're balanced. Hardik Pandya will come back to the team. With him, there's batting depth, and bowling option opens up. We know where we have to go as a combination. The XI is clear in our head. We just have to take better decisions in pressure situations to go far in the World Cup."