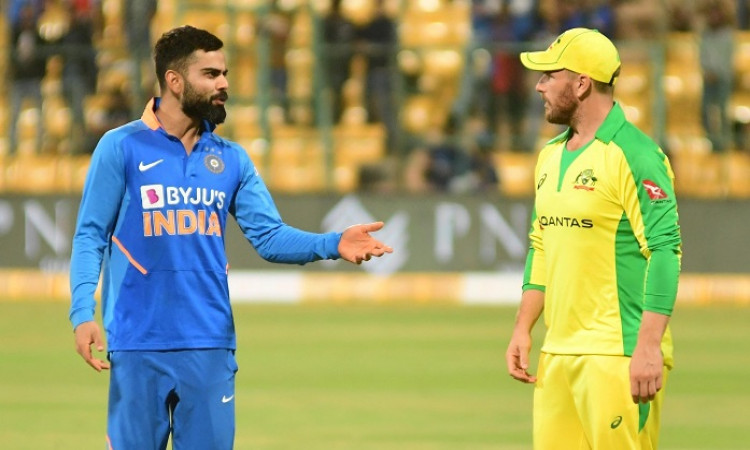 New Delhi, July 1: Australia limited-overs skipper Aaron Finch has heaped praise on Virat Kohli and stated the India captain has handled the pressure well that comes along with a job as high-profile as that of leading the Men in Blue across the three formats.

Kohli was named India Test captain mid-way through the team's tour of Australia in 2014 after then-skipper Mahendra Singh Dhoni called time from the longest format. He then took over the role in limited-overs format as well in 2017 after Dhoni stepped down from the position.

Also Read: Second group of 6 Pakistan players to leave for England on Friday

"The pressure of playing for India is one but also leading India is another and the way he (Kohli) has done it, so consistently for a long time," Finch said on Sony Ten Pit Stop show on their Facebook page.

"And taking over from (MS) Dhoni, the leadership, that is huge. The expectations were high, and he kept delivering. That is the most impressive thing (about Kohli)."

Finch went on to speak about the on-field relationship between Kohli and Dhoni and opined that the latter's presence behind the stumps has helped the current skipper immensely.

"You see the input MS still has out on the field, helping Virat, changing angles, just small things like that...I think that shows two people who are really comfortable with each other but also with their positions," Finch said.

"Sometimes in different teams, it goes like that after a leadership change, but I think it just shows the only thing that's in their minds is the best interests of Indian cricket, and that shows quality leadership from both of them."

He also likened Dhoni's post-captaincy role to that of former Australia captain Ricky Ponting, who, according to Finch, also helped his successor ease into the role. Ponting gave up captaincy after Australia crashed out of the 2011 World Cup before walking away into the sunset in November 2012.

"It's something I think we've been pretty good at in Australia as well...Ricky Ponting, letting go of captaincy, and then just sliding in and helping everybody out. That was a very similar transition, and a similar impact," he said.