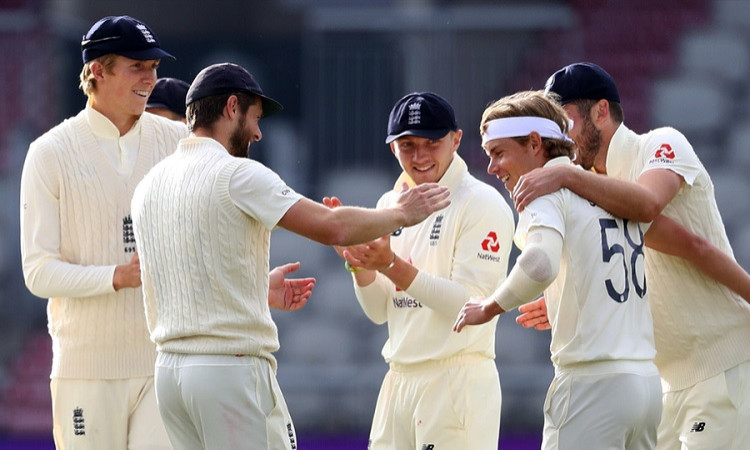 Manchester, July 18:  England on Friday continued their domination on Day 2 of their second Test against West Indies at Old Trafford. After Ben Stokes' 176, which was part of an epic 260-run partnership with Dom Sibley, Dom Bess and Stuart Broad added 42 for the last wicket before the hosts declared on 469/9.

The West Indies then lost opener John Campbell and at stumps, they are 32/1 with Kraig Brathwaite in the middle with night watchman Alzarri Joseph. The third session of the day started with Stokes and Jos Buttler looking to score at a quick rate. Stokes was on 172, having ground the West Indies bowlers to dust with Sibley over the course of the third session on Day 1 and the first two sessions on Day 2.

He however did not last too long after Tea. After Buttler hit chase for three fours, Stokes looked to go after Kemar Roach in the next. He however ended up edging him to Shane Dowrich behind the wickets while trying to reverse slap a length delivery.

This was Roach's first Test wicket in 86.5 overs. As it turned out, the next wicket came off the very next ball for Roach with Chris Woakes edging the delivery to Shai Hope at gully.

The hat-trick did not come but Roach almost got a wicket off the ball after that when he got the ball to nip back into Sam Curran and the ball went straight through the batsman and over the stumps. Buttler soon picked a man on the boundary off Jason Holder and departed on 40 off 79 balls.

Roston Chase got Curran out in the next over to complete his five-wicket haul. Bess then toyed around with the visibly tired West Indies players and when the score reached 469, Joe Root called declared the innings.

Curran struck in the 10th over of the West Indies innings when England successfully overturned an LBW decision that the umpire had given in John Campbell's favour.

A number of decisions went against the West Indies particularly during Stokes and Sibley's epic partnership over the course of the two days due to the replays finally showing leaving the decision to the umpire's call and they had no luck with the reviews while batting either on Day 2.

The replays showed that the ball would have hit almost the middle of leg stump and Campbell had to walk. Joseph was sent in as night watchman and he rattled off 14 runs off 18 deliveries, hogging much of the strike until stumps.