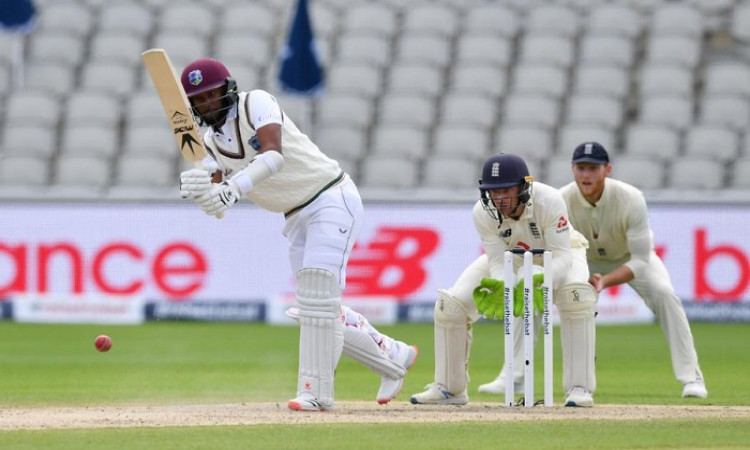 Manchester, July 19: Kraigg Brathwaite neared a half-century as West Indies eased to 118/2, still trailing England by 351 runs, at Lunch on Day 4 of the second Test here on Sunday.

Opener Brathwaite looked solid as he went into the break on 41 from 109 balls (3x4) along with Windies' batting mainstay Shai Hope, who looked good on 25 from 63 balls (5x4).

Also Read: Pakistan's Khushdil Shah ruled out for three weeks due to injury

Play was not possible on the third day due to persistent rains at Old Trafford here.

Resuming at 32/1, Brathwaite and night watchman Alzarri Joseph stitched together a fine partnership of 54 before off-spinner Dom Bess had Joseph caught at short leg by Ollie Pope.

Joseph found the fence three times in his knock of 32 from 52 deliveries.

Hope then joined Brathwaite in the middle and played three delectable cover drives to get going as his partner at the other end looked to graft.

After losing the first Test, the hosts' talismanic all-rounder Ben Stokes and batsman Dominic Sibley slammed respective centuries and put on a mammoth 260-run stand, before England declared for 469/9 in their first innings.

All-rounder Sam Curran said that England bowlers will have to push themselves for the hosts to secure a win now that the third day of their second Test against the West Indies at Old Trafford has been washed out.

Curran feels that England have no choice but to bowl out West Indies cheaply and get them to follow on. West Indies currently trail England by 351 runs with eight wickets in hand.

"We need to bowl them out cheaply in the first innings and try and get them following on. There is no reason why we cannot do that," Curran had told broadcaster Sky Sports on rain-marred third day of the Test.

"Obviously, it's going to be a big workload for the bowlers but we are nice and fresh and hopefully we can do something for the team," he added.