Manchester, July 16: Dominic Sibley dug deep to hold one end up but Alzarri Joseph built on from Roston Chase's early inroads by sending skipper Joe Root back in the hut as England were 112/3 at Tea on the opening day of the second Test at Old Trafford on Thursday. 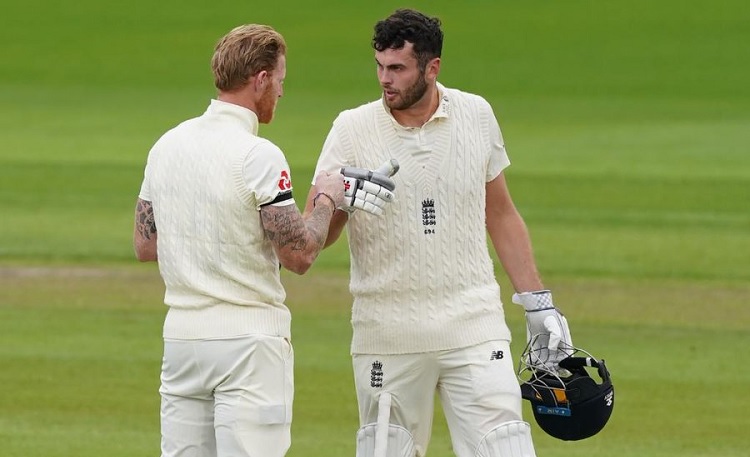 After off-spinner Chase (2/24) reduced the hosts to 29/2 either side of the lunch break, opener Sibley and Root -- back leading the side after missing the first Test -- shared a 53-run stand for the third wicket.

But fast bowler Joseph ended Root's 23 run vigil off 49 deliveries with a classic outswinger that grazed the right-hander's bat and flew to his counterpart Jason Holder at slip.

At the break, talismanic all-rounder Ben Stokes (18 batting) and Sibley (46 batting) were at the crease.

Shortly after the second session began, Zak Crawley was sent back for a golden duck by Chase who had the young No.3 batsman caught at leg slip by Holder. Having removed Burns in the last ball before lunch, Chase was on a hat-trick but missed the landmark.

Root and Sibley then steadied the ship before the former departed with Stokes joining Sibley and both trying to negotiate Joseph and Holder's fiery little spell where the ball moved sideways under overcast conditions.

Earlier, England openers Burns and Sibley got off to a cautious start but Chase provided West Indies with the crucial breakthrough at the stroke of lunch.

With rain playing spoilsport, the first session saw only one hour of play on the opening day of the second Test of #raisethebat series. England, who are gunning to level the series here in Manchester, were put to bat by Holder after he won the toss, which was delayed by more than an hour because of rain.

The run-up to the Test was marred by controversy surrounding fast-bowler Jofra Archer, who was ousted from the team for breaking the bio-secure protocol. But England openers put the distraction behind them and put up a cautious performance in the first session of the day. West Indies lead the three-match #raisethebat series 1-0.