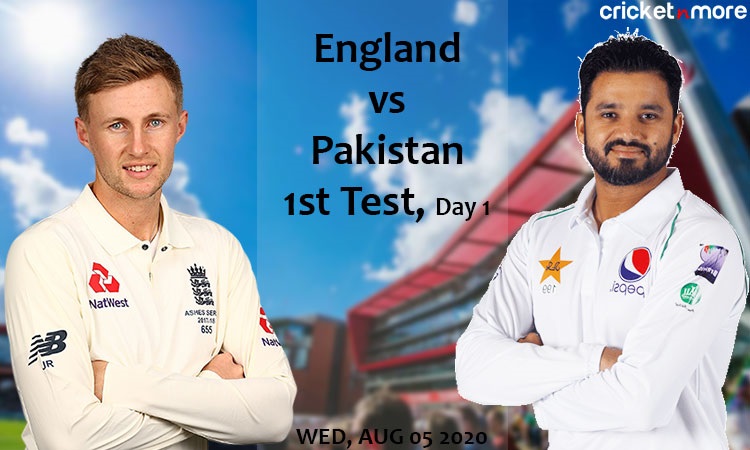 Manchester, Aug 4:  England will be wary of the unpredictable Pakistan side when the two teams clash in the first Test of the three-match series at the Old Trafford beginning Wednesday.

This will be the visitors' first appearance in an international match since coronavirus stoppage while for the hosts, they will look to bring their form and confidence over from the recently-concluded three-Test series against West Indies.

In the World Test Championship (WTC) points table, England moved up to third position following a 2-1 series win over Jason Holder's troops. The hosts have a chance to leapfrog Australia to second place, while Pakistan can overtake New Zealand to fourth position.

For this series, England have named the same squad that clinched them the Wisden Trophy and it will once be interesting to see what will be their bowling combination for the first Test.

A lot has been said about veteran fast-bowlers Stuart Broad and James Anderson playing together. They started just one of three matches in the last series together and showed in the final Test why they remain England's best bet in home conditions.

"Jimmy and Broady go together like Morecambe and Wise or Bonnie and Clyde," former England spinner Graeme Swann was quoted as saying by mirror.co.uk.

"They have formed one of the most successful bowling double acts Test cricket has known. Why would you want to chuck it out before its sell-by date?

"I can understand the attraction of 90mph pace, and both Jofra and Woody are huge assets. But I'm sorry, you don't discard blokes with 500 Test wickets lightly" he added.

Not to forget talismanic all-rounder Ben Stokes, who recently displaced West Indies captain Jason Holder from the top of the ICC all-rounders' list. He will once again have a huge say in the outcome of the series.

As for the visitors, they lack proper match practice going into the first Test but head coach Misbah-ul-Haq has stated players have done well to acclimatise themselves with the tough English conditions.

"When you play after a long gap there is bound to be some sort of nervousness but that is natural. As soon as the players step on the field, it will go away," Misbah said. "The players are fresh and anxiously waiting for the series to begin."

Pakistan will also be pinning their hopes on young fast-bowling duo Shaheen Afridi and Naseem Shah to shine in the bowler-friendly conditions of England. Not to forget they could also unleash spinners at the Old Trafford.

"We will keep an eye on the pitch and the weather conditions, today and tomorrow, before taking a decision on whether to play two spinners or not," Misbah said. "It is a possibility and an encouraging sign for us.

"The pitch and weather conditions might be favouring us at the moment but you still have to execute your plans properly to win," he added.

Pakistan will also take confidence from the fact that they have done well in the last two Test series in the England. The 2018 series ended in a 1-1 draw while the 2016 series also ended with both teams sharing spoils after the conclusion of four-Test series (2-2).